Hi - just wanted a second eye on my son’s mechanics as his 12U season ends. He is taking the fall off and want to fine tune things this winter along with starting a real workout program with him as I think physical strength is an issue at this point (even though he is a big kid). Looking at TuffCuff as a possible program to start.

I think his mechanics look very good! Personally I would keep hammering down the “use your legs” but the lower half mechanics look good with good energy/force transfer throughout. Also, definitely look into a light strengthening program (I am unfamiliar with the TuffCuff so check into that as you wish), I suggest anything from Alan Jaeger. Good luck!

I had a buddy of mine tell a story of how he went to a power lifting seminar put on by a guy named Louie Simmons from Westside Barbell. He is considered a guru…expert if you will. He had guys come up and get under the bar and perform squats and he would talk form and mechanics with every guy there. Louie was very thoughtful with every guy that squatted and gave very clear advice on how each individual could get stronger and make their lifts go up. One of the last guys to get under the bar was a very large teenager of about 19 or so. He did his squat and racked the weight. Louie’s only critique was “your problem is that you’re weak.” That was all that was said and they went to the next guy.
That may come across as Louie being an a-hole. Not at all. No other words would have helped. Sometimes we seek too much advice. Sometimes we get too much information. With your pitcher, I would say, he isn’t as strong as he needs to be (as you mentioned). Work on becoming more explosive and that will take care of a lot of things. Just get him stronger. Mobility and stability training. Change of direction training. Get him into sports performance training. The kid will love it and buy in. Once he buys in, you will see tremendous change in him physically and in his confidence. Good luck!!!

Hi Mac, I see a few things that your son can improve on that will help him with accuracy, velocity and injury prevention. When working with a pitcher one should always start with the lower half first then work their way up to the top half.

If anyone see’s anything else, please help this young pitcher. 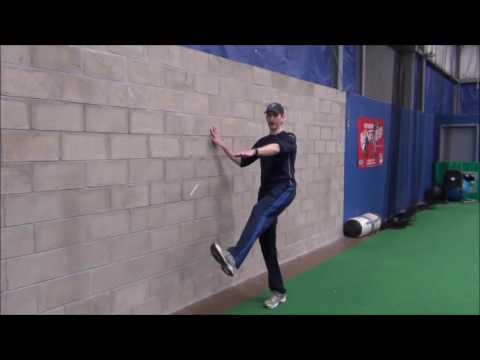 I agree with TopGun regarding the lower half. Lack of early weight shift will result in lower velo numbers. So the question is, why doesn’t your son produce good early momentum? 2 reasons.
#1 His starting foot position on the rubber. The pitcher’s support foot should be positioned so that the mid foot and heel are up against the rubber. This allows the foot to push down and back so that the lower body can move sideways down the mound. Your son is pitching from on top of the rubber. He can not gain quality forward momentum during weight shift because he doesn’t have the mound to help him push down and out.
#2 Ball release. The pitcher finishes with his head and shoulders positioned out over his landing knee and his trunk flexed forward. Your son finishes with his head and shoulders behind his landing knee instead of out over his landing knee. His trunk is in a more upright position. This usually indicates poor starting momentum where the body does not have enough energy to get the hips and trunk up and over the front hip. And this goes back to #1.

Thanks everyone for taking a look. This will give me some things to work on with him this winter. Appreciate your time.