I have some problems with my control i think its my release point but let me know you’re thoughts, thanks

u got the same problem as me

Ok the things I see wrong ARE:

YOU NEED TO THE HIPS MOVING FORWARD WHEN YOU LIFT YOUR LEG AND DRIVE TOWARDS HOME DO NOT STAY BALANCED OVER THE LEG. IN DOING THAT YOU WILL CREATE MORE MOMENTUM AND GET A LONGGER STRIDE AND THROW MORE STRIKES OK.

It does seem like your throwing “uphill” a little, probably due to being on flat ground. There’s nothing wrong with that. There are some pitchers who do that and are successful.

You don’t get enough momentum going. That isn’t the cause of your control problems, but could add velocity. He is a still of your vid. Notice how your back foot is still on it’s heel? That means not enough momentum. Compare it to a picture of Roy Oswalt. His back foot is on it’s toes and is already starting to turn over. You’re basically just using your front leg to “pull” your back leg off the rubber and not getting enough hip rotation.

There are some pitchers who get the foot turned over early, such as Scott Kazmir. 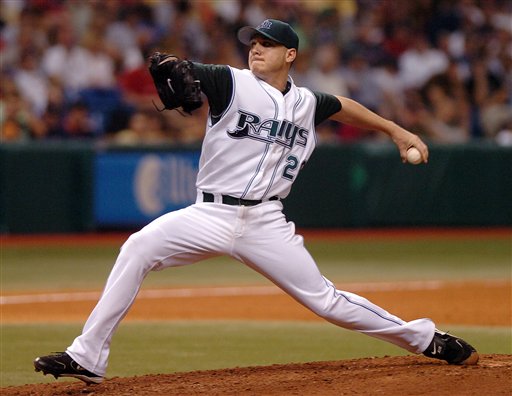 i have started to try and get my hips moving towards home plate but when i do i feel like im falling forward and i have to rush my delivery so how can i adjust this?

get on a mound

[quote=“Zito75”]i have started to try and get my hips moving towards home plate but when i do i feel like im falling forward and i have to rush my delivery so how can i adjust this?[/quote]Practice. See how your body adjusts.

Keep your back leg standing strong. let your momentum carry you forward. As DM says, practice. I hate to use the term, but stay tall as long as possible. This will help you move toward the plate correctly and allow you to explode towards the plate.

[quote=“RIstar”]Ok the things I see wrong ARE:

YOU NEED TO THE HIPS MOVING FORWARD WHEN YOU LIFT YOUR LEG AND DRIVE TOWARDS HOME DO NOT STAY BALANCED OVER THE LEG. IN DOING THAT YOU WILL CREATE MORE MOMENTUM AND GET A LONGGER STRIDE AND THROW MORE STRIKES OK.[/quote]
How does more momentum equal more strikes?
That stuff you’re preaching is for guys looking for more velo mostly.

i have started to try and get my hips moving towards home plate but when i do i feel like im falling forward and i have to rush my delivery so how can i adjust this?

Just gradually work it in. It wont really help your control that much unless your falling off or something. Controll will also come with practice. Frankly getting your hips moving is something hard to learn, gradually implement it in untill you get your timing down, then move a little farhter. Thats how I’ve been trying to do it and it seems logical.

momentum will help contol because zito75 your back foot is flat at landing and if you get more momentum then it will not be in that position and then in return will gain better control because you are in a better position then right now.

I agree with the other comments about the lack of momentum. Normally I like to judge that by looking at a side view. In this case, I’m judging that based on your being able to plant on a bent front knee and then pretty much hold that position until after ball release. I think if you had more momentum then it would tend to carry you further after release.

You have a very high knee lift in the first pitch but not as high in the second pitch. You want your mechanics to be repeatable as that helps with consistency in your release point and, therefore, your control.

A high knee lift is fine unless it causes inappropriate posture changes. In your case, it appears that you lean back toward 1B near the peak of your knee lift. And then as your knee drops you lean forward toward 3B to get in a more athletic posture. That is unnecessary movement in the wrong direction and it can lead to inconsistency. Try to find that athletic posture that you can maintain throughout your delivery and start with it. And don’t let the knee lift change it.

Now, increased momentum helps increase velocity because it creates more energy to put into the ball. However, the timing resulting from increased tempo can also help increase velocity by providing optimal transfer of that energy between links in the kinetic chain. And, it helps avoid certain flaws that can lead to injury. For that reason, I think the improved timing is the more aspect important than simply the increased velocity due to the availability of more energy due to increased momentum.

in a different way from It’s not all about increasing velocity. I feel the timing improvement is more important than the velocity improvement.

i have noticed now that since im starting to move my hips towards home plate i cant have a high leg kick like i do because i lose my balance, so what works for me is a smaller leg kick that enables me to keep my balance and control but timing this is very difficult but like ya said i have to keep on practicing it, as far as my back leg goes when i do get this momentum going my back leg is suppose to be rolling off the rubber like in the roy oswalt picture? thanks everybody by the way

zito75, This is the same thing that happened to me the leg kick will come down but you get more momentum that is better then with that high leg kick and no momentum.

So keep working on it ok. Do alot of reps on the mound or if you can’t find a mound flat ground.

Your goal should be to maintain your normal knee lift height. If you have to sacrifice it initially, so be it. But you should strive to regain your knee normal lift height. The act of swinging that heavy limb out front from a higher point will increase momentum. But it does take practice as well as build up strength and flexibility.