Wanting to clarify and revise my thoughts

Recently there has been a little debate over natural vs learned teaching styles. If anybody was confused or didn’t understand I just wanted to clarify. I also realized that I was wrong to some degree and need to refine my appoach. I realized that pitching is a skill-specific sport, it does require some degree of instruction. So I was wondering what to teach, when I thought “if I had a kid, what would I teach him?”. So I thought of this:

Those would be what I would teach my kid, he would have to figure out how to add his own styles and quirks to best match his genetics and strength levels. If he ever needed help, I would gladly.

Some people may think that I should teach my kid scap pinch and torso hip seperation, but I think that that stuff should naturally happen. And that if he finds his “perfect” delivery that those pieces would fall into place

I hope this helps you understand what I believe about mechanics. In no way did I mean that you should just throw your kid out onto the mound and say “good luck” without any instruction. I think that at a certain point he has to figure it out on his own, because I can’t feel what hes feeling. Now to begin with, he might look like a cookie cutter pitcher, but as he matured he would be able to add his own styles to them. As these “guidelines” became second nature to him he would be able to just focus on his control and allow his mechanics to adjust to match to that goal.

Well, Priceless…you and I had a miscomunication, cause we’re a lot more similar in our thinking that I thought.

This well thought out post doesn’t exactly match up with what you wrote earlier…but, it seems now that you’ve given it some thought and are now able to better verbalize your true philosophy.

I agree with campsdad, Priceless…very well done. I think you nail some important issues very squarely.

Of course, life might be drab and uninteresting if everyone agreed completely about everything.

Jim Dixon was the first I’m aware of, in his fascinating but obscure book “Exceptional Player”, to hypothesize that perhaps only 5 - 10% of the population just naturally use their hips/torso correctly for an efficient throwing motion. From his studies, Dixon believed that that was one of the central factors that sets the “gifted” throwing athlete apart from the rest of the herd. Dixon also believed that most of the rest of us could also learn to do the same things with our hips and torso that so-called “gifted” athletes do; however, it may never just come naturally, i.e., without conscious training toward the goal of developing hip-shoulder separation and delayed shoulder rotation.

As far as the very young athlete whom we are tacitly discussing here…I would agree that he would be better served right now by optimizing other, earlier issues in his delivery–dynamic balance, early momentum to the plate, etc–as you have already pointed out.

But, at some point in his baseball experience–maybe by the time he is 10, 11, or 12 yo (?)…if he still likes to pitch, his dad and he might want to make sure that he really does get hip-shoulder separation with delayed shoulder rotation around the time that the stride-foot lands. If it’s an issue at the age they get around to looking into it, there are some things they can do.

[quote=“campsdad”]Well, Priceless…you and I had a miscomunication, cause we’re a lot more similar in our thinking that I thought.

This well thought out post doesn’t exactly match up with what you wrote earlier…but, it seems now that you’ve given it some thought and are now able to better verbalize your true philosophy.

Well to be honest, I had a revelation. I looked at it more from both of your points of views and that led to this post. Also I realized that it was alot different for me since I picked up pitching 2 years ago and was more along physically than your son. I probably didn’t exactly match with what I said earlier. I have recently just found out what works for me. I just focus on the target because I have realized that my delivery is pretty good (do not mean to brag) and that I don’t need to focus on it when I’m on the mound. I can just focus on hitting the glove. your son however, isn’t like me and I apologize for making that mistake.

As to laflippins post, I agree with it that as he ages he might need teaching on seperation. But the way I see it, is that if everything else works, then seperation might not be an issue. And if he adjusts his mechanics to his strength level as he matures then it probably won’t be an issue.

I didn’t read all of this or the other post because I’m 24/7 so to speak at work, so forgive me if I say something that has been covered.

I can’t remember where I read it, maybe here, but the best analogy I heard was comparing pitching at a high level to art, you either have it or you don’t. You can’t teach someone to be a Picasso, nor can you “teach” someone to pitch, or pitchers would be a dime a dozen.

That being said it’s a given that the right instruction can help a person get the most out of his god given abilities.

Sorry to interrupt this revelation, but i need to know a few things as a pitcher training

What is scap pinch?

What does making your head go down a forward do?

Thanks guy’s. this conversation has caused me to look deeper into my pitcher’s soul and try to find my roots.

since im a beginner i should say; “what i want my roots to be.” haha

either way this was my revelation. thx

Scap pinch is when the elbow go behind the plane of the shoulders: 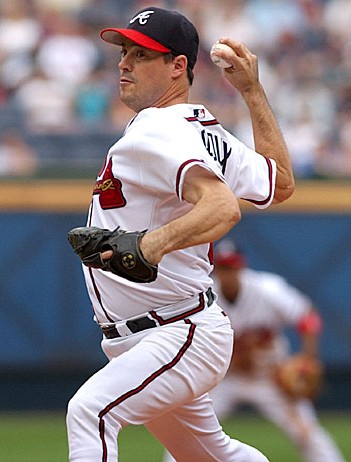 you’ll have to scroll down a little bit.

Head goes down then forward refers to the loading on the back leg, this helps with achieving good leg drive and taking stress off the arm. If you watch maddux his head goes down before going forward.

I think that you might have to teach seperation, however I think that if mechanically you are solid especially keeping closed longer then it should happen naturally.