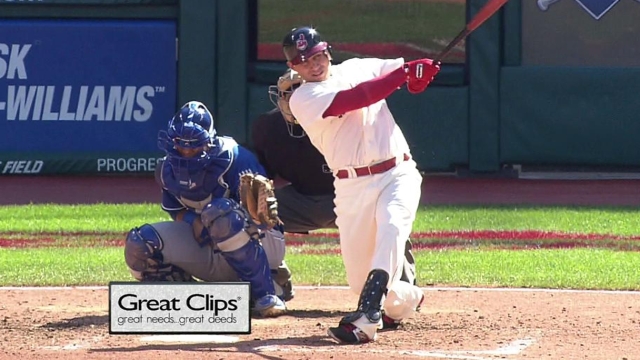 NASHVILLE, Tenn. -- The Indians and D-backs have discussed the framework of a deal that centers around Tribe shortstop Asdrubal Cabrera and Arizona right-hander Trevor Bauer, an industry source said early Wednesday. The two clubs have been...

Apparently the Diamondbacks can’t handle someone thinking on his own…

Bauer has Oakland written all over him to me…except for the money maybe. His problem is walks from what I can tell. With him playing here in most of last season and knowing two guys that work with the Aces in day to day operations stuff he is (according to them) a great guy and a good team guy. His issues might revolve around control and walks, but, having gotten to watch him pitch right behind home plate a couple of times his stuff can be straight filthy. Im wondering why they would be moving him…if it is the training side of things, they knew about that when they drafted him.

I would bet money it’s a front office vs. on-field staff dispute. The FO probably loves him. The big league staff almost assuredly does not.

You’d be surprised at how many trades come about as a result of such disputes—front office versus field management. And in the end, nobody wins. I remember 1954, when Yankee pitcher Vic Raschi was involved in a contract dispute with the front office; it got heated, to say the least, and the FO got fed up and packed him off to the St. Louis Cardinals! He pitched one season for the Cards and then retired. As for the Yankees, if they had kept him they could easily have won the pennant and possibly the World Series that year. :shock: :o

I know very little about him and think he comes off like a know-it-all; which is annoying when it’s coming from a 15 year guy that is sniffing at the Hall (if that’s an accomplishment). From Bauer it is just too much.

Your probably right with it being an on the field thing as opposed to front office. I could see a coach getting his feathers ruffled because a guy is sticking to his own training routine and not doing the coaches…although from my understanding Bauer was very upfront about that when he was drafted. Would seem a mistake to me to give up on a 21 year old guy with that kind of stuff, but, Arizona has other needs and has pitching. It makes sense to fill a need like SS with an everyday player that is a high quality player. Could be as simple as that.
Ive read many things with or about Bauer he doesnt seem like a know it all to me. Seems like a guy who is curious and likes to see what works for him. But who knows? Pretty tough to form an opinion about how a guy is from interviews.

Maybe both parties could have handled it better, sure. But based on the pro guys I’ve talked to here (the open-minded ones), they were not surprised at all that he’s having trouble. Pro baseball is still ridiculous.

Wow. It is a strange business I guess. Baseball is not immune to emotion overriding reason I guess. I hope he lands someplace where he can do his thing.
How is the Ranch? Look forward to hearing your impressions.

Nothing short of amazing. Will expound later when I can collect my thoughts. I present tomorrow.

That’d be so awesome if the Indians got Trevor! I’d get to see him pitch all the time! I love Cabrera, but we need pitching bad, and we have some good prospects coming up that hopefully can fill the SS need will have if we trade him.

The Indians definitely need some starting pitching in the worst kind of way.

Regarding the remark that baseball is not immune to emotion overriding reason: You are so right! I’ve seen so many examples of this, not the least of which a playoff and a World Series were won and lost because the managers in question goofed big time. The 1951 three-game Giants-Dodgers playoff: Chuck Dressen sent in the wrong pitcher to pitch to Bobby Thomson in the ninth inning of the third game. It should have been Carl Erskine or Clem Labine or anyone except Ralph Branca. But Dressen wanted nothing to do with Labine because the latter was in the doghouse. And he had completely forgotten that Thomson had homered a number of times off Branca, including Game 1 of the playoff. And then there was the 1960 World Series: Casey Stengel started Art Ditmar in the opener, just because he wanted to have Whitey Ford go in the third game which would be at Yankee Stadium. Overwhelmed by sheer sentiment instead of using his noodle; if Ford had pitched the opener (which he probably would have won) he would have been available for Game Four—and, if needed, Game Seven. And the Series would probably have turned out differently.
Two glaring examples. And we probably have not seen the last of this disturbing phenomenon…

Yeah, true Zita. Then you have a guy like Boche who seems to have a great feel for who to go to, just not out of the pen but in terms of subing for D ect. In terms of someone like Bauer it just seems strange to draft a guy knowing what he does then wanting to dump because of it…Kyle is probably right, the change in the FO led to the move.
I have seen this so many times in youth sports coaching football. A coach will have a kid who he sees as, say, a fullback. After 2 practices in the coaches mind this kid is a fullback and thats it. By the time the next season rolls around the kid is 4" taller, thinned out and spent months working on sprints, back pedal and change of direction. He now has a skill set to be a cornerback, but, to the coach he is fullback because that is what he once decided. Because he once made that decision this is how he continues to see this kid. The coach sees a kid who is a fullback who no longer plays well and who ends up riding the bench. Basically, so much of this stuff comes down to ego. In this example the coach wont change the kids position because it would mean the coach changing something he did the year before regardless of all the evidence. The ego can fool the eyes to the point someone isent even seeing reality.
In terms of football the guys I coach with have had a long run of very successful seasons. Its not because we are brilliant coaches. It was the simple realization that you need good atheletes on the lines. Instead of doing what everyone else was doing and putting all the fat, big or slowfooted kids on the line just because they are bigger, but, trying to match the requirements of the position to the kids skills and mentality we have been dominating for years. Probably a bad comparison, but, I think eventually baseball will have to come around to the reality of what they have been doing. The individual player (like Bauer) will eventually be given the space to be himself and excell. Until then, I guess ego will continue rule the space occupied by the suits.

I always see the ego card thrown about Trevor and I think that is just a bogus way of saying he is pretty smart and believes in what he does. People talk and talk about his warm up, acting like he is playing a full game of basketball then coming to pitch, like no he is getting his body ready to go. The landscape of baseball is filled with a bunch of people who don’t question why they do certain things. I am a die hard D’Backs fan and this trade really ruffled my feathers, luckily he is an Indian now as opposed to somewhere else though.

Kyle, in your signature (if that’s what it’s called) that “eventually” may be a long time unfortunately. Just got to keep fighting the good fight.

Sean…I dont think there is anything weird about his warm up. The stuff he does for most part makes sense to me. It is funny to me that a whole industry is, for the most part, so closed minded.

I don’t see anything unusual, weird, bizarre or anything like that in the way this guy gets warmed up for a game. If engaging in a rousing game of basketball does the trick for him, rather than messing around with machines, and he gets to the ballpark needing no more than a few pitches to get ready, good for him. He knows what the right thing is for him to do, and he does it, and if his stuff works for him during a game and he throws strikes, good for him too. Different players have different ways of getting ready, and those who have their heads in the sand are NOT looking for water (which the ostrich does when he sticks his head down there), they’re just hiding and wishing all this would go away. As Whitey Herzog would say, they’re missing a great game!

Kyle, in your signature (if that’s what it’s called) that “eventually” may be a long time unfortunately. Just got to keep fighting the good fight.

Yes, Trevor Bauer is weird—the way Mike Fidrych was weird (the way he talked to the ball), the way Bill Faul was weird (the way he used to hypnotize his pitching arm and ask it how it was feeling), the way Bill Lee was just plain weird and still is—and for baseball players this kind of weird is perfectly normal. Things would be terribly dull and boring if we didn’t have a few players like that to spice things up.

I think the media and everyday fans make the biggest deal about the warm up, it is looked at almost like guys aren’t even supposed to warm up. Just show up and pitch. Crazy talk.

Trevor is interesting, just listening to him talk always brings a new experience.