Good article in USA Today about hard throwers and injuries. Thought it was insightful recognizing that pitching hard is both a blessing and a curse. I see this with my son, who takes the world on his shoulders 'cause he’s unfairly expected to strike out everyone. And when he doesn’t, it’s a feeling that he let his team down.

“Sometimes we think it’s so easy for guys who are able to throw hard,” Wendel says, "but what a lot of these guys really brought home was that, ‘Hey, this is something that’s been given to you, and now it’s up to you whether you’re going to turn it into a blessing or a curse.’ " 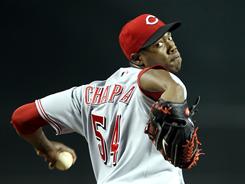 The Washington Nationals' Stephen Strasburg electrified baseball with his sensational major league debut on June 8, 2010, when he struck out 14 Pittsburgh Pirates and flashed a 100-mph fastball.

There is indeed a difference—a big one—between throwing and pitching.
Anybody can throw a baseball—and throw it hard—but pitching is a whole other story. It involves, among other things, using the noodle. My pitching coach of long ago once told me, “The most important pitch you can have in your repertoire is the noodle”—and I knew immediately what he meant. The brain.
He told me a story about when he had first joined the Yankees, having been traded from the White Sox. This was in 1948, and Joe Page—perhaps the first of the great closers—was with the team at the time. He was constantly getting on Ed Lopat, ragging him about his lack of speed, calling him all sorts of names and telling him that he threw nothing but junk. But one day Lopat stopped him, saying, “You know, you’re right. I do throw junk. But look, Joe, you can get out there and get the batters out with the stuff you throw. However, to get them out with the stuff I throw—that takes brains.” And Page stopped getting on him.
And if you’ve ever noticed, it’s those pitchers who use their brains in addition to their arms that last longer and are far less prone to injury.
They know how to conserve their energy—to pace themselves—and as a result they can go deeper into games, go nine full innings without running out of gas. Even at lower levels of the game—Little League, Babe Ruth, whatever—young pitchers can learn to pace themselves; after all, most of them can throw a changeup. It’s a matter not so much of throwing hard as of pitching smart. 8)