The 2 most important pitching goals?

These are the two my pitchers are working on these first two weeks of scrimmages. What goals are you (or your pitching coaches) having you work on? What are your Top 2 goals?

My goals have been 1. First pitch strike / Work ahead and 2. To not walk anyone,

#2 has to be a goal. No walks. Any batter who happens to get on base has to earn it.
As to #1—how many times have I said this? Get the first pitch in there for a strike. You do that, you’re ahead of the game. Get to 0-and-2, finish the batter off with a third strike—and watch him foam at the mouth and curse a blue streak as he returns to his dugout with only a futile AB to show for it.

My first goal as I step on the rubber would definately be:

For youth baseball, my two goals would be:

All well and good—if you have a fast ball.
I did not, and I realized early on that I would never be one of those rip-roarin’ fireballers, so I went in the other direction and became a snake-jazzer—a finesse pitcher. My arsenal at the beginning consisted of a curve ball (a built-in one which came attached to my natural sidearm delivery), a knuckle-curve, a palm ball (my first changeup), and the crossfire (a beautiful and lethal move which works only with the sidearm delivery). Later on I learned the slider, which became my strikeout pitch, and expanded my repertoire to include a circle change, a “slip” pitch and several variations of all of the above.
My goals were simple: one, get that first pitch in for a strike. Two, figure out what the batter is looking for—and don’t give it to him. Make him go after your pitch, what you want him to hit. Three, no walks.
And I won games.

An article from today’s Sweetspot, by David Schoenfield, summarizes a pitcher’s goal:

1.) Locate your pitches
2.) Change speeds
3.) Keep everything below the belt.

[i]Here’s one plate appearance against Tim Lincecum in the Giants’ win over the Rockies. Chris Iannetta leading off the bottom of the sixth inning:

What was poor Chris Iannetta supposed to do? He saw seven pitches, saw four different types of pitches, saw six different speeds, saw fastballs on both sides of the plate, and didn’t see a single pitch above the kneecaps.

Frame that at-bat, kids, because that is how you pitch in the major leagues. You don’t have to be 6-foot-5 and 230 pounds and throw 95 mph heat to win. Locate your pitches, change speeds, and keep everything below the belt. When Lincecum first arrived in the big leagues, he wowed us by throwing 97 mph fastballs past hitters high in the zone. He doesn’t do that anymore. He manages a game, out-thinks the hitter. He’s no longer The Freak. He’s more like The Pitcher. [/i] 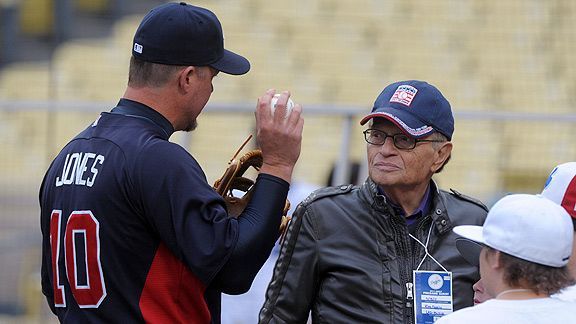 Don't get carried away by Big Z just yet