I believe that one of the few things all successful major leaguers do is stabilize their glove arm close to their stride foot. (There are some variations, but for the most part at release the arm is stabilized over the foot). This is a critical skill to learn for any pitcher to have success. I believe the best way to stabilize is to “Swivel and Stabilize” which means swivel the elbow into the body and use the hand almost as a hinge. The hand should have as little movement as possible.

To begin with the stabilization of the glove arm starts when the the shoulders begin to turn (around footstrike). I will be using Greg Maddux and Randy Johnson (two of the best pitchers of all time) to help demonstrate. 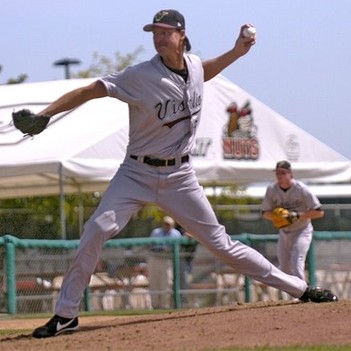 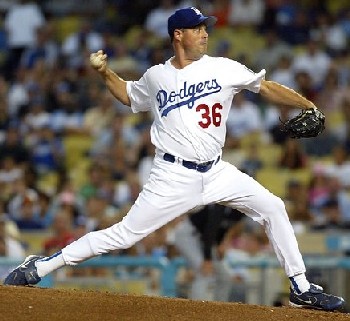 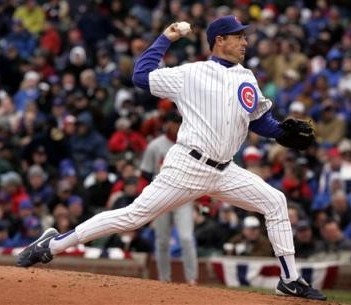 Notice how the glove hasn’t moved. Now at release 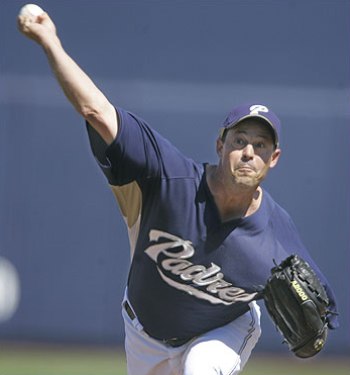 Now notice how both have barely moved their gloves (Maddux has to some degree but its still stabilized out front). Now after release depending on the arm slot and where the glove is stabilized the throwing arm will either go over or under the glove. As long as you stabilize it doesn’t matter.

I hope this helps. Try stabilizing and see the results.

I don’t think any of those pitchers you mention say to themselves that they are going to stabilize the glove over the foot and then concentrait on doing that and have it work. It happens naturally as a result of their arm action. Just another example of how the little things make the big things happen. Nolan Ryans arm action is more compact then most and so his glove never gets out over the foot and has led me to beleive that the important part of glove side arm action is acheiving a proud chest in a comfortable manor. Perhaps though, Ryans more compact arm action is a bit more efficiant even though, obviously, the glove over the foot works just fine.

I agree that pitchers should not be thinking about mechanical details during actual games. Practice time is for coaches and mechanics, game time is for the pitcher to pitch.

On the other hand, Priceless has identified an important mechanical issue that is a serious flaw for a large percentage of untutored kids. What’s more, if they never learn how to correctly use their glove-side for throwing they are almost guaranteed to be weeded out of baseball fairly early on.

After all, every player except a DH needs to throw efficiently…by about High School age the majority of kids who let their glove-side flop loosely to the side before ball release…are out of baseball (or will be, shortly).

That being said, if a thrower has an issue with glove-side mechanics they can and should be taught with quality reps in practice until efficient mechanics feel ‘natural’ and supersede old, bad habits.

“It happens naturally as a result of their arm action.”

----But if it doesn’t “happen naturally” glove-side mechanics can and should be taught.

If that idea doesn’t add anything to what what you were saying, please disregard it…

I don’t think any of those pitchers you mention say to themselves that they are going to stabilize the glove over the foot and then concentrait on doing that and have it work.

Clearly, the pitchers shown above are well beyond thinking about much of anything mechanical. Not saying they don’t ever because issues creep in on the best of the best. But they most likely learned gove-side management long, long ago.

It happens naturally as a result of their arm action. Just another example of how the little things make the big things happen.

I agree with the opposite and equal point up by jwest, but like I said there are some variations. And Nolan Ryans glove still is somewhat close to his stride foot at release.

1 final thing. I used Johnson and Maddux, two pitchers with great control. Now Ryan did have downright filthy stuff, BUT he was not known for his pinpoint control. He was a great pitcher no doubt. BUT Ryan would not be a good model if the goal is control.

Priceless: Something like a 1.25 lifetime whip, over 5000 k’s, 7 NO HIT games, over 300 wins and with the teams he played for. Not known for control? are you kidding me? Those pitchers you point out are greats but they are not The Express. Ever wonder what type of control is required for a no hit game? How many do Maddux and Johnson have combined?

"Telling a young pitcher to stabilize the glove without telling him how it’s done is useless and puts too much emphises in the wrong place (the glove) because as I’ve said the glove stabilizes as a result of GS arm action. "

—Young pitchers absolutely can be instructed to stabilize the glove out front and bring the torso forward to meet the glove during launch of the baseball. Tom House has been teaching kids how to do this for years.

The correction feels very awkard for awhile to those who have a lax glove-side, or those who actively pull the glove into their torso, before ball release in their delivery. But, that’s the whole point of consciously thinking about mechanics during practice and doing lots and lots of correct reps…bad habits need to be displaced by good ones, to the point where good habits eventually become an unconscious part of the game delivery.

Proper glove-side control can certainly be learned independent of making overt changes to the throwing arm–it is needlessly unproductive to tell pitchers that glove-side control is ‘natural’ (i.e., you either have it or you don’t). If it doesn’t happen to come naturally to them, it is something that definitely can (and should) be learned.

In fact, this very point, and many other coaching issues that are important to House date all the way back to the early motion analysis research he was doing with Nolan Ryan and others, late 80’s-early 90’s when he was pitching coach for the Texas Rangers.

Glove-side control was one of the first things he helped my son with at around age 9. It can make a huge difference to pitchers who are doing most things pretty well but, for one reason or another, are not controlling the glove-side in their delivery.

okay, well since I don’t know how to do it perhaps you will give me the instruction that will work for stabalizing the glove. How do I do it?

One good way to start with a group of young kids, most of whom will invariably have terrible glove-side control is this:

This artifice will obviously feel awkward for awhile, and it is somewhat cookie-cutter in nature…I get that. But try to think of it as a course adjustment to a serious problem, which each individual will fine-tune for himself to some degree over the reps.

I see. How do they acheive a proud chest in that manor?

I’m not sure what you mean, jwest.

I’ve done many times what laflippin has described. In fact, I’ll use the knee drill or House’s rocker drill to work on this initially because those drills effectively take the lower half out of he equation allowing the pitchers to focus entirely on the upper half.

But I’m still trying to figure out how throwing arm action leads to glove-side stabilization. I’ve seen plenty of young pitchers whose throwing arm action is just fine yet their glove side sucks (as laflippin put it :mrgreen: ). Furthermore, if you consider the timing of the events of the delivery, many pitchers put the glove out front and start dropping it prior to foot plant while the throwing arm is still getting into the cocked position. Thus, by the time the throwing arm does anything significant, it’s just about too late to stabilize the glove side.

laflippin: proud chest I also herd it called pinching the shoulder blades together, or here lately scapular loading. I’m wondering how holding the glove over the foot allows or makes that happen? Or is it the way they get it over the foot that causes the proud chest? Both Maddux and Johnson display the proud chest and it can be seen in some of the photos that priceless posted on this thread.

Part of stabilizing the glove side over the stride foot includes the idea that the pitcher brings his chest forward to meet the glove. That creates the ‘proud chest’ look that I think you’re describing.

I think the chest forward vs stable front side/glove side/non-throwing side isn’t exclusatory. I’ve thought about why you have such an issue with front side stability jwest, you’ve been consistant over time in your postings that you have concerns about it…so I just kinda hunkered down and thought about it…I’m thinkin that we’re actually talking about different instances in time, on my YouTube channel one of the vids shows it in stills very clearly, Andy who has been taught stable frontside for several years… (I’ll drop the link it’s a slideshow with pictures in hs shot by the FlaTimes Union so turn down the music if you want, its at the .59 sec to 1:20 mark so you don’t have to watch all of it…the scap load one shows his sinker grip) also at another instant of time presents the pinched scap attitude you are commenting on here. I agree that it is very desirable but it is also very acheivable with an equal and opposite foot strike followed by keeping the front side stable. Maybe this is can clear this up…at least in my feeble gourd.

I think that if you can’t say “the glove is stabilized at this exact point by the foot in every single high level thrower”, then it is not an absolute and more of a style mechanic. In all the photos that have been presented, everyone is different. I believe that as long as you stabilize the glove in any manner it doesn’t really matter. If you’re going to point to control issues over the glove side, it’s quite possible, but I strongly believe that control issues would most likely stem from other mechanics more involved in throwing the baseball such as hip movement or timing of rotation.

So when a pitcher flys open with his gs he’s actually doing it with his hips…which I think could be classified in the timing catagory also, or it is a byproduct of poor timing in the torso or is it lateness with the pitch getting to the power position? Timing, I’m certain is a major element. I think over-rotation also can play a huge role with accuracy problems, it tends to make any timing issue magnified because the body is centrifically taking the body away from point of target. It’s one of the issues I take away from when I see momentum pitchers, unless they mechanize with the front side in order to provide a consistant pathway to the target (i.e. frontside stability) they tend towards issues with accuracy. A general statement no doubt but more often than not in my experience.