My Son is complaining of a sore bicep. He is 9 years old and our ace pitcher. We have been throwing a lot and have been very careful about warming up prior to ever picking up the ball. By a lot I mean 4-5 days a week playing catch with 30-40 pitches in the bull pen on those days.

He has always had a good arm and is very accurate (but we have always thrown almost daily during the season). We took the fall and winter off from baseball and starting getting back into throwing about a month before the season. We are halfway through the season. 6 days ago he went 70 pitches for 4.33 innings with 10Ks. Well over 50% first pitch strikes. No complaints of a sore arm ever. Than 3 days after this outing we were playing catch and a little mechanics work (maybe 40 throws total) and he complained his bicep hurt. I noticed he was not throwing hard and mechanics were all over the place. When I asked if his arm hurt he said yes. This is the first he has ever complained of a sore arm. He said he woke up that morning with a sore bicep. This was 3 days after his outing with no throwing between. I have shut him down. He has not thrown since and he says it’s still a little sore but better.

Very concerned dad looking for ideas. We have practice tomorrow and I am not sure I should let him throw at all. No games until next week Monday.

Beginning in March he has pitched 19 innings and thrown about 350 pitches.

Have the doctor take a look at him and see what the score is, and go by what the doc says. You want to be careful with the kid’s arm. 8)

At what percentage does the kid throw? You could throw a hundred pitches a day seven days a week at 50%…

My kid threw 10 innings last weekend at varying velocity FB’s with some change-ups and curve balls thrown in. He’ll see his pitching coach tomorrow and throw for the first time since. That’s a little long between arm swings but the way it worked out.

Strength trainers will tell you two to three times a week, the muscles need time to repair. Throwing is kinda like working out.

He sounds like a solid pitcher for his age. From your post I suspect you will rest him and protect him as you should. It’s hard at that age because reliable pitchers that win games are hard to come by.

I will try to post up some video for some advice on how to insure good mechanics protect his arm.

Looking back we overused him in that weeks series of game. We had 2 make up games mixed in. So, he threw 35 Thurs, 35 Saturday, 35 Monday, and 71 Wednesday. 186 pitches in 7 days. I always insist he throws his routine in the BP before hitting the mound. Which includes 10 relaxed warm up throws- catcher standing in front of the plate. Than 30 pitches at 80% - 10 in front of the plate, 10 on the plate, and 10 at normal distance.

You seem to concerned about your sons health including good warm up etc but I think there is a concern of overuse both in practice and games.

I would consider a 30 pitch bullpen max 2X per week would be the best for his age. 160-200 pitches plus the rest of practice is lots of arm work and stress on young muscles.

[quote]Beginning in March he has pitched 19 innings and thrown about 350 pitches.
[/quote]

That is quite a few pitches and innings already this year, numbers say 18-19 pitches per inning, maybe 3 or 4 appearances? I would think that the max numbers per year would then head toward 1500 pitches for this season or so? His pitches could head toward 2500 or so for the year.

Check this article out from the USA Baseball Medical & Safety Advisory Committee:

My suggestion is less throwing and if he wants something baseball to do, then more core work, cardio and flexability work to get him stronger and faster. But remember he is 9, it’s a long way to high school and college.

Thanks for the article.

[quote=“real green”]
Looking back we overused him in that weeks series of game. We had 2 make up games mixed in. So, he threw 35 Thurs, 35 Saturday, 35 Monday, and 71 Wednesday. 186 pitches in 7 days. I always insist he throws his routine in the BP before hitting the mound. Which includes 10 relaxed warm up throws- catcher standing in front of the plate. Than 30 pitches at 80% - 10 in front of the plate, 10 on the plate, and 10 at normal distance.

My son has thrown hard since he was able to walk. He’s 11U now, and has yet to throw more than 1000 pitches per year - about 950 at 9U and 964 at 10U. I’m aiming at 1100 pitches (+/-) this year. At 10U I included BP throwing into his pitch count since his BP was done like game conditions. At 11U, his typical week (weather permitting) is a 40 pitch BP, one 60 - 70 pitch game, and another day of playing catch and throwing 20 pitch BP. Limiting his pitches and exposure to “success” has not hurt his development. So far this year, he only has 50 pitches - 30 in BP and another 20 from a scrimmage game. He pitched two innings in the scrimmage, throwing 16 strikes out of 20 pitches, with 5 Ks and no walks. This week his team has two scrimmages, a practice and opening day. He’ll throw two innings in the first game, have a day of BP and pitch three (+/-) innings for opening game. That’s it. The goal is for his arm to be fresh when end of the year tournament season comes around. I want to see my son healthy and pitching when he’s older. In the big picture, showcasing him at during his youth years is not that important. 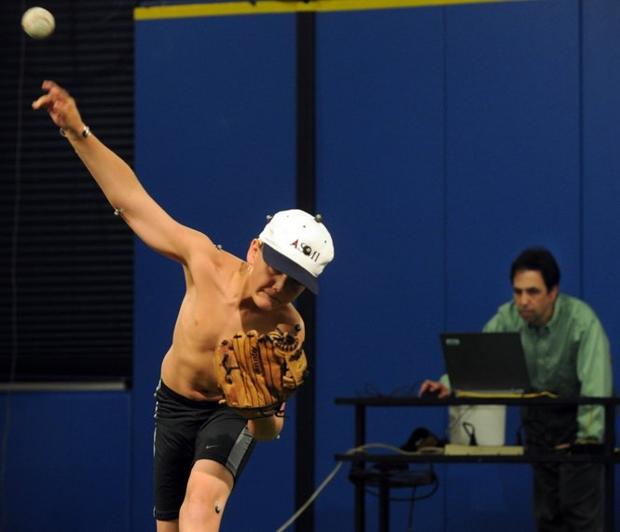 Study shows youth who pitch more than 100 innings in a year are 3.5 times more...

"There's no reason that a teenager should be coming to one of the doctors at Andrews Sports Medicine for a surgery on the elbow or shoulder like the Tommy John surgery that used to be essentially for 35-year-old pitchers." Glenn Fleisig lead...

Another article on the effects of pitching too much.

That is a great artice too, obviously from the picture they were getting data for slow motion action, have you seen that anywhere?