Do you guys think i should buy the real radar gun, the ones scouts use, “Stalker Sport”?

Im really anxious towards getting a radar reading on my fastball. To make sure were Im at.

I just want to get clocked bad, and no one near here has a radar gun. Accurate like the ones pro scouts use.

The Stalkers are going for over $700 on eBay. Unless you can get one for a lot cheaper, I think you will regret buying it. I think you would be better off getting cheaper one like a Bushnell. They are still very accurate and you won’t be dropping a small fortune on it.

I bought a bushnell before and i regret buying that.

It wasnt accurate at all.

[quote=“king.navarro34”]I bought a bushnell before and i regret buying that.

It wasnt accurate at all.[/quote]

I was going to say just that. Don’t buy the Bushnell.

If you’re using a radar gun for training purposes, this one is very accurate: 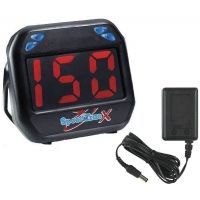 We use one with good results (although it can be fussy at times and not give you a reading at all which is pretty common with most radar guns).

How do you use that one?

How do you use that one?

Sounds like you just put it on a tripod and it will give you your velocity when you throw the ball.

We use it mainly positioned behind a net. Throw directly at it seems to work the best.

I’ve had it on tripods off to the side slightly when throwing to a catcher but can’t verify the accuracy when used in that manner.

Speed-Check radar works well for the way it was designed; however, you guys do need to be aware that Speed-Check radar boxes only measure the speed that the ball is moving when it gets close to the box.

If you set the box up behind a net and throw 60’6" toward it, you should expect that your release velocity (i.e., the speed of the ball just as it comes out of your hand) will be approximately 7 - 8 mph higher than Speed-Check’s reading.

The discrepancy between “home plate speed” and “release speed” is caused by air resistance. Radar guns like Stalker Sport measure the peak speed of the ball, that is, they measure the ball’s speed as it comes out of the pitcher’s hand.

Actually the radar is good for up to about 30’ and will achieve “out of hand” speeds (similar to a Stalker) from that range.

Hence my reference to using it as a training aid when throwing into a net.

Obviously if you have the coin, getting a Stalker is the best if you want to use it in game situations and get out of hand speed readings.

I disagree with you 101–I own both a Speed-Check and a Stalker Sport.

My Speed-Check does not read velocity from 30 feet away–it reads it from about 3 feet away.

Well…I am going by what the manual says actually (I have the Speed Trac X not the Speed Check which is the older model).

Comparing the velocity of what my son throws, to that of when he is gunned using Stalkers…I would say it’s pretty close (within 1 MPH or so).

Again…for training purposes…it’s a good tool. I don’t have a Stalker to compare it side by side to however.

We throw from about 20 feet away directly at the radar.

According to the specs discussed at OpticsPlanet the Speed Trac X does have a bit more range than the original ($50 cheaper) Speed-Check radar box.

Personally, I think the greatest value of radar readings is for the pitcher to get a feel for the speed differentials between fastball, breaking ball, and change-up…and you can calculate those difference-numbers from a Speed-Check or Stalker or any other reliable radar device as long as the readings are taken from a consistent distance and angle.

(Of course, most pitchers just want to know one thing–the speed of their fastest heater).

I have a bushnell radar gun. We use behind the catcher and a little to the side, pointing it to the pitcher at normal distance. The best I could get was 65mph and I thought it was the velocity out of hand.
Could it have been the speed of the ball when it was nearing the catcher like the one you are talking above?

How should I use this bushnell radar? Behind the pitcher? 10ft away from the side or on a diagonal line?

I honestly feel that the Speedrac radars are only good for training purposes. Setup behind a net and thrown at it works the best and the feedback that it gives (MPH) you is the real key to it all.

Especially if your are throw training to develop velocity. The radar doesn’t lie and it will tell you if you are making progress or not.

Otherwise the Stalker is the way to go. In fact I wish I had one even for training purposes as they seem to be more reliable when it comes to ghost readings (or the lack there of). Plus it’s what most scouts use.

As far as the Bushnell…I wouldn’t waste the money on it. If you are off to the side (diagonal from the radar) it will not give accurate readings. Most radar won’t although some (Stalker and maybe Juggs) are better at the triangulation than others.

If you want an easy way to check velocity… Insted of buying those expensive guns, you could just video tape yourself pitching some pitches and counting the frames per second that it takes to get to the plate… Then just use math to figure it out… Not going to be 100% accurate, but i would say it would be better than buying a gun if you dont really need one. (btw you would have to subtract a couple feet becaus of your stride)

Counting the number of video frames at 30 fps, multiplying by the time per frame, and dividing by the exact distance will give you the average velocity of a pitch, subject to some errors (exact distance is hard to get right unless you actually measure the distance from your true release point to the target and there is also some error arising from the amount of time it takes to record a single video frame while the ball is moving relatively fast.

Finally, the velocity you get from the video method is “average velocity” not “peak velocity” like radar guns measure. The difference is substantial, and will just make most pitchers feel bad about themselves if they don’t understand the details.

The commonest, and most accepted, velocity measurements for pitchers is “peak velocity” as measured by a properly calibrated radar gun. “Peak velocity” is the velocity of your pitch as it comes out of your hand at the release point.

This is just my opinion. You are better off spending the money and I’ll tell you why. Kevin Sietzer(Hitting coachh for the KC Royals and former MLB player) did a youtube video comparing the $800 Stalker Pro sport 2 with a $150 Pocket radar SIDE BY SIDE to go one step further they used a Ballistic Precision Chronograph(which is used in fire arms testing). His findings would floor you The Stalker Pro sport 2 was within a half mile per hour on almost every speed. However the Pocket Radar was significantly lower on every speed. But what was interesting which may answer your question is this; As the speeds got higher, the difference between the Stalker and Pocket Radar was bigger. It started out with roughly 50-60mph Stalker was only 3mph difference. By the time they got to 100mph the difference was huge(10-11mph).

I don’t know about your thoughts but you know the old saying “you get what you pay for”. The reason I believe Kevin Sietzer’s study over numerous people endorsing the Pocket radar is this: When my son was 9 he got clocked at 55mph with a Stalker, but 52 with a Pocket Radar. Then this year at age 10 he got clocked by a Stalker at 57-58 with a Stalker and 54 by his coach using…you guessed it, Pocket Radar. Then again got clocked by his coach (who ironically always says velocity isn’t that important at this age) at 57 just 3-4 months later. Only a month after that, he got clocked at 61mph using once again a Stalker.

The off the fingertips talk is real, the difference is significant, might be 3mph from fingertips to home plate, might be 7-8. Just think of a ball being hit by Stanton from the Yankees, it’s well over 100mph leaving his bat. But by the time it reaches the outfield bleachers its practically floating into someone’s bare hand. I’m confident Stalker and Jugg’s are getting an off the fingertips reading…with Pocket Radar, in my experiences, it is not.

If you don’t want to spend the money on a gun spend the $50 gas travelling somewhere that has an expensive gun and get clocked once or twice a year. I just feel sorry for guys out there getting a 78mph reading at age 16-17 and thinking I guess I don’t have what it takes to become an MLB pitcher and give up on their dream because of it, when in reality they could be throwing 10mph faster than they think. Because if Kevin Seitzer’s tests are accurate(which I believe they are, because I’ve seen the same differences between the 2 guns), there are lot of people getting short changed on there findings.