Pasted 2 videos, I hope. Anyways. The first is where we are, the second is where we were. The thought is to teach my kid to hold his wind up closer to his body, shorten the distance from start to finish. Bring more lower body into the motion. Tail end of last year complained about lower bicep pain. Also attempting to greatly reduce the methodical leg whip. Does this look right

Is there a reason you eliminated his leg lift?

The reason I’m asking is that his position is much better at both hand break and at ‘equal/opposite’ in the LOWER video.

In the top video his upper body is leaning back as he comes into foot strike; in the lower video he’s driving down the mound better than in the top video. I think you need to find a middle ground on that leg lift that allows him to still get is posting leg forward rather than being static and that gets his upper body forward rather than backward between hand separation, equal/opposite, and foot strike.

Wall drill, for this young man, may instill the feeling he needs to have prior to hand break. Don’t confuse wall drill with Hershiser drill.

Yeah the leg lift will not be totally eliminated, just reduced and alternated with a shuttle/glide step and being taught to generate power without it. He has a ways to go on that. Primarily I was asking your thoughts on his arm movement, rather than it moving backwards towards second base it goes about half that distance.( I am not a pitching coach so I may not explain very well). As I understand it,coach is trying to lessen the distance and twisting the arm goes through from glove separation to release of the ball.

This type of arm motion works well for many catchers, as well as pitchers. He still has full external rotation of the shoulder, as I was able to capture a frame with his forearm fully laid back. Does he still have the biceps pain? It may be something as simple as squeezing the ball too hard in his grip.

Coach just started tooling with his mechanics in November following a September where bicep pain was experienced. There doesn’t seem to be any immediate negative markers to indicate we’re moving in the wrong direction and we are about half way through the adjustments

There is one pitcher I can think of that actually had early hand break, who is a lefty, and reminds me of the new upper body throwing mechanics your son has and that is Billy Wagner. The one thing that Wagner does and has been eliminated by your son is, a high leg kick. This leg kick helps with early weight shift, momentum, and sitting back into his stride. DId you ever consider leaving the pitching arm alone and go after fixing the lower half?

If you continue to move forward with this arm action make sure your pitching coach concentrates on teaching your son early momentum with this new delivery. The pitching coach has to get the bottom half working for your son. Sitting back into the stride engaging the back leg and keeping his center (core) of gravity over his driveline to home plate is a must. If he doesn’t start using the lower half properly he messes up the kinetic chain and becomes an all arm pitcher. My concern would be once he learns how to use the lower half correctly, will that compromise his new arm action? Exactly what you don’t want.

My $.02. Not a fan of the new arm action change. I thought he had a great short and efficient arm action leading up to release. Catchers have more arm issues than pitchers, they just don’t throw with full intent as often. The lower half takes time, shortening the arm action that much could cause major timing issues and kill the sequence and kinetic chain. Shortening it to match a lack of lower half drive may cause worse issues. I’d offer that his bicep issues were more related to his lack of drive leg and kinetic chain forcing the energy to be generated from mostly his arm, that combined with his recoil and poor pronation at the end. He has a great front leg but I’d say that is helping him generate his velocity more than his drive leg. A potential leg issue in the future. Fix the lower half and bring back the original arm action prior to release and fix the recoil with a better follow through/pronation to protect the arm.

As you see here and probably elsewhere, turfguy2, there are various opinions and suggestions based on observations, techniques and coaching experience(s) that’s for your consumption.

In the process of educating and enhancing your son’s pitching experiences, consider this:

So, working on his strong suits, I suggest taking a video of him throwing the ball from … say an outfield position to … say… home plate, as if he was trying to gun down a runner rounding third and heading home.
Just make sure he’s warmed up with the customary stretching, flexing, and tossing the ball around first.

Take about a dozen throws as I suggested, on video. Play back the video in slow motion and take special note of how and what parts of the body he depends on the most during this movement(s). Pay particular attention to these parts of your son’s body: 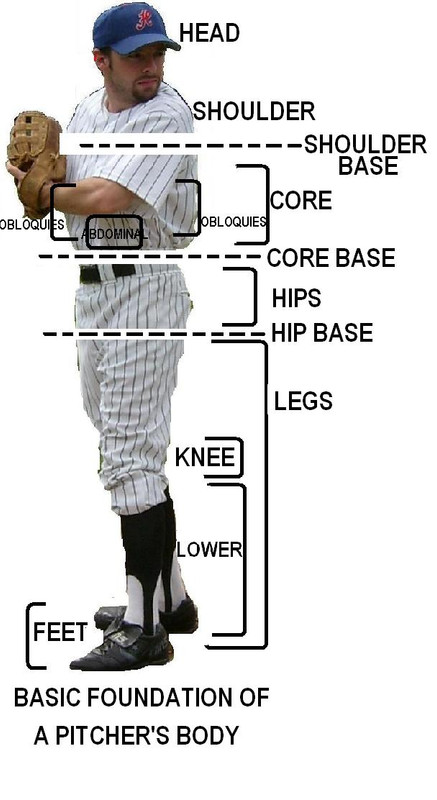 You be amazed at how easy it is to recognize with the body has self-taught itself and functions in its natural order of movement, balance, and recovery from movement and recovery.

All of this mind you, is on a flat surface on the field, no holes, no distressed slanting surface to land on, and no restrictions to what the body can and can not do using the limited space on a pitcher’s mound.

As you watch your video you and your son will pick out things that you never noticed before - especially with the before and after observations. In fact, the more you watch said video, you and your son will start picking apart every movement - field throwing Vs mound pitching. Every single variance between the two motions will be a chance to ask each other… Why? And in response… “does this help or hurt your son’s pitching experience.”.

By the way, you don’t need a pitching coach for this. Listen to you son’s , why-n-what-for, as he and you make visual comparisons. It’s that easy.

There is a lot of benefits of arm action change at a young age. I’m talking only noticibly bad arm action. From I was a kid I had terrible arm action and no one told me that it looked wrong, but after watching so many videos of myself I knew something needed to be fixed. When I was 15 I fixed it and everything went up from there. In only i was from 68-70 to 82-84 and with offers. Of course other things play in like maturing, getting stronger, and mechanical differences, but arm action was a great catalyst for changing other things in my mechanics

Nickthebeast, I agree because 99% of coaches teach young kids really bad arm action. Bad: break hands down and immediately swing arm directly up into 90 degree, ball facing center field. It seriously makes me sick to see it. And these same coaches when they throw a ball their arm works nothing like that. The kids that throw well are usually the ones that ignore this coaching and just do what comes natural. the coaches don’t push back because they only see results but don’t really know what is happening. They focus on the kids that don’t throw so well and basically make sure they never will. My point before was that a pitchers arm action is longer to let the bottom half have the time it needs. The catcher pulls straight back, the pitcher breaks down and delays; but both then pull back with the elbow, flipping up maintaining the bend in the arm, the arm does not straighten and then bend up towards center losing the tension. The arm does not windmill.

My point to the OP was not to shorten the arm action to be like a catcher, in order to make up for a bottom half that is not taking the time to properly drive. From the angle of the video it looked to me like he had a perfectly good arm action to begin with and needed to instead focus on the legs. Without the energy created from the legs and properly transferred out the arm with perfect timing and sequence the arm has to make up for it and that puts a lot of stress on the arm.

… DId you ever consider leaving the pitching arm alone and go after fixing the lower half? …

… The lower half takes time, shortening the arm action that much could cause major timing issues and kill the sequence and kinetic chain. Shortening it to match a lack of lower half drive may cause worse issues…

The original motion looked pretty explosive. What did the change do to his velocity? I would think that the high hand break and the ball going straight back at break would hurt his velocity. The hands should have some sort of downward breaking motion to them. Take a look at this videos of MLB pitchers on youtube and see how many have this type of arm path. I don’t think you will find very many.

“As I understand coach’s method”. If you lower the ball in the first half of the sequence it must be brought back up and follow through with the release. The arm twists and has to go from loaded to full extension and then back to the loaded then to release. This twisting and at the same time loading then releasing is hard on the tendon going through the elbow. The “tommy John” tendon for lack of a better word. This method is a relatively “new thing” (2 yrs) being taught. I have confirmed this with one or two high school coaches they agree its the way to go right now

I can see why he had lower bicep pain in the first video. It’s like he never really got extended after release…as if he is subconsciously trying to slow his arm down prematurely. With everyone else here…fix the bottom half back the way it was before. New arm action is not good. Go back to normal and fix the follow through in my opinion. Good luck.