We attended a couple prospect camps over the last month or so. I thought I would share a couple things and looking for feedback. My Son is 6’ 160 with a 6’7 wingspan.

He cruised around 77-78 and hit 79 a couple times. He is 15 and has no where near his Mature body yet. They seamed interested in him but not really.

After a couple tweeks will be into the low 80’s. Has anyone ever had experience with this kinda of thing. I get quite of few invitations to camps. It’s hard to know what makes a good DI prospect. Just looking for some thoughts and anyone who has had experience with the recruitment process.

In my experience the camps didnt mean much. My son would get invited as well (although I assumed this was mostly due to his involvement in travel ball) we went to one. The two kinds of camps where there were multiple schools represented and the ones put on by one school.
When I started to look up the coaches that were representing the various teams I saw a lot of unpaid assistants. In other words guys that used to play for the program that were in intership positions basically. I dont know if the schools get a kick back for being represented at the camps or if it is just to get their name out there.
As for the camps put on by specific schools. We atteneded one of these as well. There were maybe 50 guys in attendance (at $300 per). They ranged in age from 21 down to 14. When I did research on the college (local to where I live) I found they have been having the camp for about 10 years and have found 2 or 3 players in that time (this from a person in the program)…basically, they are fund raisers for the college. If they happen to stumble upon a player, great.
When my son started being recruited (not at the D1 level) he was contacted directly by the head coaches or the pitching coaches. He had attended camps at none of the schools he was recruited by. None of the kids we know ever got so much as a legit call back from a school where they attended camps. They did get more mail inviting them to spend more money and attend camps.
But, that was just our experience.

College camps can be two-fold.

On one hand they help generate revenue for the program. And in some cases, that’s all they do.

On the other hand, it’s a lot easier for colleges to invite a ton of prospects to come to a camp than it is to travel all over the country trying to see them.

How can you tell if the latter is the case?

I’m not saying it’s a perfect formula, but look to see that the camp is for high school athletes only - typically sophomores, juniors, and a few unsigned seniors. If there are kids 14 and younger, the camp is probably more revenue generating than recruiting focused.

Don’t be afraid to ask the coaching staff. When it comes to the recruiting process, you don’t want to just tag along for the ride. You need to be proactive. And when I say “you” I mean the ballplayer (your son). A college coach would much rather speak with the player than the parent. He wants to know that the kid is interested and is responsible enough to care.

Here’s how the process works:

We had the chance to see you play and consider you a possible prospect and would like an opportunity to see you again to further evaluate. On ______(insert blank date) we will be hosting our ____________(prospect camp name) and would like to invite you to attend.

I coached at the college level for 9 years, 6 at the D1 level. I have a free ebook that gives you an inside look at the process, Recruiting Tips 101: The Good, The Bad & The Costly
http://baseballthinktank.com/do-you-want-to-play-college-baseball/

ThinkTank is the expert. Here are a few things I observed through the “recruiting” years of Sophomore and Junior seasons at camps:

Just my humble opinion. I would advise the following: be in shape, look like a ball player, no facial hair, hustle like crazy, get a list of coaches in advance and tell them you are attending, meet them IF APPROPRIATE.

Here’s how the process works:

Good info Thinktank, kind of confirms what I had gleened from the “outside” of the process.
If a camp is geared more toward instructional stuff, for younger high school players, there could be some value I suppose.
The most important thing in the process is to be honest with your kid and yourself. How does the kid really play? If he is a pitcher how is his velo? If he struggles vs. high school breaking balls you can forget D1 usually. My son had a on base over .400 his senior year of HS, when he asked his current coach the odds of him getting some at bats with the college team the answer was “zero”.
Grades matter in a big way. How is the kid socially? Is he going to be able to deal with being far away from home for the first time or would he be better suited being a short drive away?
My point is getting a generic invite to a camp the coaches know nothing of the kid. When my son was being contacted by coaches during his senior year they had already spoken to his HS coach, they had spoken to his travel ball coaches. They had watched him pitch. Even though the game they were at he sort of unraveled (4 innings, 0 runs, but finished his outing with walking 3 of his last 4 hitters, retiring the last guy to get out of it) he carried himself well on the mound, didnt get down, didnt show bad visually for not getting a close strike 3 call. Learned later another kid he was in town to scout threw a complete game 2 hitter and the coach told the kid no thanks; he was shaking his head at the ump, yelling at teammates for errors, throwing his glove heading into the dugout ect. This is very important for young guys to realize…you never know who is watching a game.
So, unless your kid is gonna show unusual velo or be very projectable probably just a name on a list. No biggie. He has time and one good thing from camps is he will be used to doing his thing in front of coaches.
Also having him contact coaches at schools he is interested in is a good idea. In our experience they were always honest.

the approach I took in high school was that none of it matters unless you are good enough. No amount of politics will get your kid on a D1 team if he throws 83mph. No amount of showcases, even if he goes there and strikes everyone out, will get him on a top team.

Develop him first, get him to at least the low end velocity range (85-87mph) and then he may start getting legitimate interest from those schools. I went to one cheap showcase sophomore year, then went to Maryland’s recruiting camp my senior year once I was sitting 85mph. Even then, striking out just about everyone I faced in 3 innings in the showcase, I only made it because I was projectable and I was left-handed.

As a righty, 85-87 is the bare minimum. Worry less about colleges now and develop relentlessly until you can at least draw some interest.

I come from the prospective of a parent of a good HS/Select parent. My son is a P/OF/1B. He throws 83-85 and touches 86/87. While he isn’t a DI or maybe even a DII prospect, there are a LOT of DIII schools that will consider kids that don’t reach 85+ or other measurables that are widely out there. Of course he was told from the time he was a freshman that he had to run a sub 7.0 60 and throw 85+ but he was still able to have options by widening his search. He had looks from about 6 schools that were legitimate options being that they were close. Then there were others that were ruled out because of location. He ultimately has committed to play at the University of the Ozarks. The main thing is that many of these schools are private but some offer significant academic scholarships. My son ended up getting ~75% academic.

I did sign my son up with a recruiting service and while they didn’t “get” him a scholarship, they did show us options that we never would have thought of. Nearly every school that ended up being interested we had never heard of. He also went to several showcases and camps. IMO they did a couple things. First they showed him where he really fit and what other competition is really out there that he is in competition with. Second it gave him an opportunity to talk directly to coaches and ask them what they thought. I would focus on camps of colleges that you want to go to and get in contact with that coach and showcases that give you written feedback.

If you throw 95 MPH in a barn in Eastern Siberia someone is going to hear about it whether or not you went to a showcase.

My most “celebrated” HS client (whatever that means) was given free entry to PG events because they needed him to make the event look less embarrassing. He throws 90-92 which is all that really matters but his pitchability is also a plus trait. Unsurprisingly he’s a PG “10.”

He went to one event throwing 82-84, same stuff, same body, same great pitchability. OK breaking ball, plus changeup, outstanding command. No one gave a damn. He went to one six months later and hit 93 and everyone was tripping over their clipboards to offer him a scholarship. Not a damn thing changed besides his velocity.

Trevor Bauer never did a single showcase except for a walk-on one he did for free because he wanted a few more innings on his buddy’s team. What he did as a JR in HS was throw 94 MPH with plus secondary pitches.

If velocity didn’t matter, Stetson Allie (OH) would have been a late round flyer at BEST. 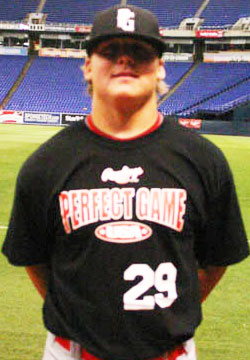 Did you get a good look at that? Here, I made it easier for you.

Allie hit double digit batters in HS and walked every other batter, doing more of the same on PG’s circuit of events. But Allie could hit 100 MPH and reliably sat in the high 90’s, so who cares?

You’ll note on that PG page he was drafted in the 2nd round and was paid 1st round money.

What everyone knows but no one wants to admit is that throwing hard is what matters the most to get the most amateur looks out of HS. College is a different story, but not much of one.