MLB Draft for a Sidearmer?

In honor of the MLB Draft coming to a close today, how hard would a sidearmer with a 3:00 arm slot would have to throw to get drafted?? A Jacob Dorris type of arm slot.

Tom Hackimer is a sidearmer who was drafted in 2016 by MLB from a D! program. He plays ball for the Pensacola Blue Wahoos double a affiliate of the Twins organization.

Here is MLB.com’s scouting report on him:

A New York native who stayed home to pitch out of the St. John’s bullpen, Hackimer turned down the Mets after being drafted in the 15th round a year ago to return to the Red Storm for his senior year. The school’s career saves leader put up video game numbers this spring, making the decision seem like a good one.

Hackimer dominated college hitters with two pitches delivered from a funky sidearm slot that adds deception to every delivery. His fastball is just about average velocity-wise, thrown 88-91 mph, but it plays up because it has plus plus life and he can throw it effectively to both sides of the plate. Right-handed hitters have no chance and when his slider is effective, he can get lefties out as well.

If he can continue to show he can get hitters on both sides out, he has the ceiling of a setup man. If not, he could find a niche as a right-handed specialist. 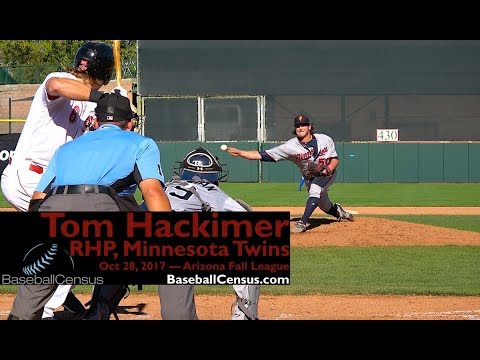 Have seen Hackimer in action!! Love his mechanics and slot. Just very surprised that the average velo to get drafted was 88-91. Having a 3:00 slot with that average velo must play up.