[size=9]The Basic Grip: The four-seam fastball is gripped with the index and middle fingers gripping the top curve of the horseshoes’s C.[/size]

Notice the spacing of the index and middle fingers: Santana and Lincecum have spaced their two fingers say a centimeter apart, while Hamels’s fingers are more like an inch apart at the top. The upside to gripping the fastball with the fingers spaced closer together is that it creates tighter spin and therefore a straighter and faster ball, while the wider grip doesn’t sacrifice too much velocity or straightness and adds a better hold on the ball. Whatever suits the pitcher is what works best – there is no right answer.

The two-seam fastball is a pitch that sacrifices speed for movement. Although still a fastball (and generally the second-hardest pitch in a pitcher’s cache), the two-seamer will move around, not in the way a curveball or even a cutter would, but more erratically and not sharply in one direction.

The two seam fastball is gripped with the fingers aligned with the | | part of the seams where the seams are almost parallel to each other. The ball is thrown straight and without any supination or pronation of the wrist, forearm, or elbow.

[size=9] Adam Miller, a top prospect in the Cleveland Indians organization, shows the rotation of the two-seamer (scary-lookin’ guy, ain’t he). You can see the U shape of the horseshoe frozen while it rotates backwards after release.[/size] 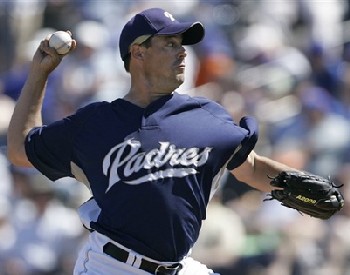 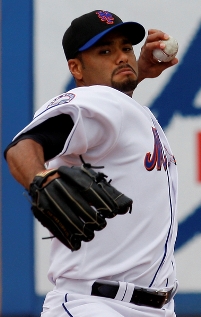 Lilly seems to grip his two-seamer more diagonally across the seams than the others. Although it’s not from experience, I’m guessing that this creates more spin but lets up velocity compared to the typical grip.

The cut fastball, otherwise known as the cutter, is a fastball that looks straight and true like a four-seamer until a very late break in the pitch cuts away from a righty batter from a RHP. The pitch can fool batters very easily as they are lead to believe that the pitch is a four-seamer before the late break. The pitch is similar to a slider if not for the higher velocity and more side-to-side break than the slider.

Mariano Rivera has basically modeled and lived his career off this single pitch – and here’s why:

The late break is fatal to a left-handed batter who, thinking the pitch is outside takes it only to watch the ball break over the outside corner at the last moment. To the right-handed batter the ball appears to be coming towards them, but suddenly it breaks away and towards the inside part of the plate.

The index and middle fingers are gripping the ball like a four-seamer but instead of being centered the fingers are offset towards the thin and open part of the C of the seams. The ball is thrown straight – when released the ball is being pushed from the outer 1/3 and therefore the ball has some side-to-side spin on it, but not like the side-to-side spin on a curve that the wrist supinated with, creating the late and sharp break.

The split-fingered fastball, or splitter, is often used as an off-speed pitch or strikeout pitch rather than a true fastball like the four-seamer. It’s gripped with the fingers split wide apart, straddling the ball.

The splitter is thrown in the same way as a fastball would – as Steven put it, “same arm action, same arm speed. The difference, of course, is the grip.” With the fingers spread wide across the ball, the friction and force that you put behind the ball that is actually carried into the ball’s motion (you still put as much force behind it as you would a four-seamer) is decreased and limited, creating less spin and less velocity behind the ball. The outcome of the pitch, if executed correctly, is a sharp drop at the end of the 55’6" the ball travels from the pitcher’s hand to the plate.

Clemens was one of the most prolific and successful users of the splitter (steroids or not, the bottom dropped outta that ball). [size=9]After forever of searching for Clemens’s grip, I found this picture. It isn’t the best view to see, but by my eye it’s too wide to be his four-seamer and too wrongly positioned to be a slider.[/size]

You’d be amazed to see how hard it is to find a picture of a MLB pitcher gripping his splitter as there aren’t many users of the hard-to-master but great pitch. Jose Contreras is known to grip a softball between innings to keep his fingers nice and loose for his splitter/forkball.

The two-seamer is used between a strikeout pitch and a four-seamer. Although it doesn’t have the movement or speed differential as say a curveball, it moves around – more than the four-seamer, at least – and can be used as a set-up pitch for counts like 0-1, 1-1. If it works, and the batter is fooled by the movement, you’re in a position with a 0-2 or 1-2 count where the curve or change-up can be used.

The cutter can be – and is – used as a strikeout pitch because of its deceptive looks. Because of the look of the straight fastball out of the zone, a batter is most likely to take the pitch thinking it’s a ball. However, the ball darts back to one of the corners of the plate for a strike. The gif clip of Mariano Rivera illustrates this more.

When the splitter is used, it is almost like a change-up or curveball. It moves so sharply and so much that the pitch has a curve-like sense to it. The split-fingered fastball drops out of the strike zone quickly and is used as a pitch the pitcher goes to in a pitcher’s count or a 2-strike situation.

Does anyone know how to get the GIF movies to loop? I’ve sent xv a PM about it but he hasn’t gotten back to me, so if anyone can get back to me it would be really helpful. xv - if you’re reading this - check your PMs!

Bump till Steven moves it…

Can someone explain to me more accurately how the cutter is griped and released? I still don’t understand what it means to release it from the outer 1/3.

Doesn’t the splitter put alot of pressure on your elbow tho?

You might be confusing the splitter with the forkball. There’s a huge difference between the two. For the forkball—which I do not recommend unless one has a King Kong-sized paw—the pitcher grips it between the index and middle fingers, actually grips it between them, and that puts a tremendous strain on the whole arm and the hand as well. OUCH! The splitter is a first cousin to the forkball—but it’s actually closer to a fast ball than to the offspeed breaking pitch, and it’s easier to throw and to control. The pitcher grips that one as for a two-seam fast ball but with the index and middle fingers off the seams—usually just off them, maybe a little wider, but not the extreme grip one finds with the forkball. And you throw that one just like a fast ball. If you don’t use it too much, it won’t put any strain on the elbow or anywhere else.
And you can turn it into a changeup just by loosening up on the grip. So don’t worry about it. Use it with discretion, and you have a nice pitch with which to bedevil the batters. 8) :baseballpitcher:

Thanks. but I throw my splitter in a different spot on the ball and it’s dirty.
PS- I have 9 inches from the bottom of my thumb to the end of my middle finger.