How Do Sliders and Release Point affect the chance of injury

I’ve heard that the higher the release point, ones chances of gettting injured increase.

I’ve also heard that throwing a significant amount of sliders increases ones chances of getting hurt.

Old wives’ tales, both of them.
Let’s look at the second one first. The fact is, if a pitcher has learned to throw a slider correctly, that pitch is actually easier on the arm than, say, a curve ball; in fact, a lot of pitchers who have trouble with the cirve will do very well with the slider. When I learned to throw the slider, my coach told me “Throw it like a curve, but roll your wrist, don’t snap it,” and by that he meant ease up on the wrist action—think of a chef flipping a pancake or a crepe. I did, and I never had any problems with that pitch—it became my strikeout pitch, and I built my whole repertoire around it. And the fact that I was a sidearmer didn’t hurt.
About the release point—here’s the skinny on it. If a pitcher’s release point is low, the pitch will probably be high, and vice versa. It has nothing to do with release points and everything to do with how the pitcher is, or isn’t, throwing the thing. You don’t get a sore arm or anything like it from having a high or a low release point; you get it from throwing the pitch incorrectly, throwing too hard, or some other mechanical problem. Again, me—because I was a sidearmer, my release point was consistent; it was the pitches I threw that confused and discombooberated the hitters!

not sure if any studies have been made on that, but i do know one thing though,

every arm angles, wether its over hand side arm or submarine, all have the same release point as far as arm positioning, what changes is the tilt of the shoulders. and here’s shunsuke watanabe probably the most exagerated submarine pitcher ever. 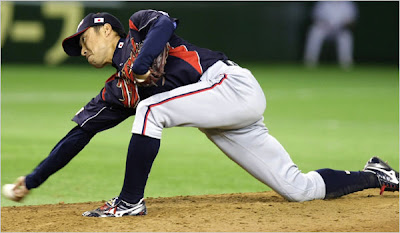 everyone of them have the shoulders aligned with the pitching arm when the ball is released.

And there’s the key—the arm and the shoulder are level with one another.

[quote=“chew1109”]I’ve heard that the higher the release point, ones chances of gettting injured increase.

I’ve also heard that throwing a significant amount of sliders increases ones chances of getting hurt.[/quote]