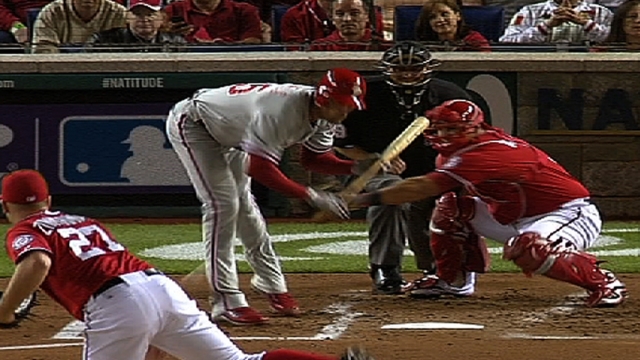 Hamels accomplished nothing with Harper hit

What did Cole Hamels prove? What lesson did he teach Bryce Harper? Other than looking silly, Hamels appears not to have accomplished a single thing. If he wanted to teach Harper a thing or two, he should have thrown him a couple of heaters on the...

And how about the fact that Zimmerman plunked Hammels when he came up and isn’t getting suspended or fined?

That’s what I’m thinking its bad some of the old guys are gone I’d love to see him face Pedro, Clemens, Smoltz, Johnson and see how quickly it’d take him to change.

This story for me, wasn’t about an intentional beaning. It was about this:

Harper showed his hustle taking the extra base on the single to left. He showed his baseball IQ when he timed Hamels’ move to first. Having it timed perfectly, he took a nice lead at third and bolted for home when Hamels threw to first again.

I’ve been waiting for someone to play the game like Pete Rose used to play it. It’s been a long time. MLB players are mentally fat and out of shape… a few of them are even physically in the same boat. Harper is going to make them check their mirror in the morning.

I watched this kid in AA, dive for a line drive in left field and make the catch. The runner on 3rd thought he could tag and easily coast into home. He thought wrong…most outfielders would have conceded the run. Harper threw a laser from his knees and the runner was dead on arrival.

He’s got talent no doubt about it.

He is definitely a throw back style player on the field with how he never gives up on anything. It’s going to be fun to watch him play over the years if he keeps playing that style.

But off the field that’s another story, but he is improving I’ll give him credit.

On another forum someone suggested that perhaps this was a calculated move on Hammels behalf since he’s going into FA and wants to prove that he’s a “tough old school” player, I find that hard to believe myself.

Leyland had this to say 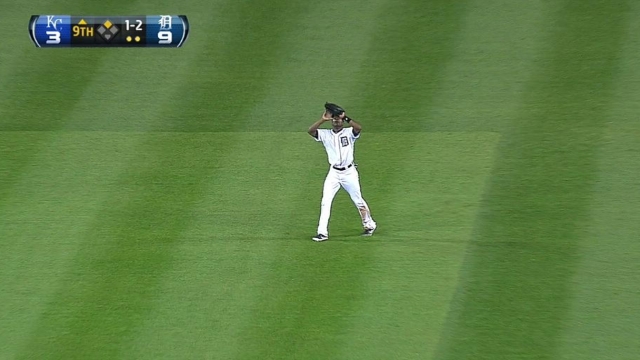 SEATTLE -- Tigers manager Jim Leyland is considered an old-school manager by many, but he considers Cole Hamels' move to hit Bryce Harper with a pitch anything but that. Leyland told Tigers play-by-play broadcaster Dan Dickerson on his regular...

It’s a tactic…right or wrong…to get in the kids head. Think about the next time he faces him, he probably won’t be intimidated but he will remember the incident and he won’t be as focused. OLD SCHOOL TACTICS!!!

1st to 3rd on soft liner to left and then steals home. Following that he goes 2-3 with a double against the guy that plunked him and not one instance of hot-dog along the way. I’d say his focus is just fine. Old school response to old school tactics.

Not saying it worked just I would imagine what message he was trying to send.

I think they can hit him all they want, but don’t be surprised when he flies around the bases and scores. Eventually they will stop.

That was such a dumb move. I, personally, never try to hit anyone at any time. I know that it hurts and it does nothing buy put a runner on. I would rather prove my point by striking out someone. But if something like the Harper/Hamal situation I may be tempeted to hit someone. I wouldn’t ever try to hit anyone without a very very good reason and even then I would probably just throw behind. That would get the message across just as well as hitting him.

I was watching sportscenter earlier and I was listening to Stephen A. Smith talk about that situation and he was basically saying that Cole and all baseballs would never do anything if they could actually fight without the benches clearing. He also said Cole didn’t have to worry about any consequences to his actions(physical ones.)

Which I believe he talked out of ignorance. If he was in the AL Stephen would have been right in saying that, but in the NL pitchers have to bat. So he took a big risk throwing at Harper like that because he can get hit right after.

Dumb decision by him. Strike him out. Introduce him the real way. Old school my butt.

[quote]I received the new issue of Baseball America in the mail today. Bryce Harper is featured on the cover nicely attired in his Southern Nevada uniform . He has the typical upside down Oakley sunglasses perched on the brim of his hat. Straddling his shoulders held behind his neck is a Marucci model CU26 PRO black in color. This is a quality bat used by hundreds of pros and fashioned from “pristine Pennsylvania lumber”. Not coincidentally the trademark on the bat is facing the camera and so is the personalized custom lettering burned into the barrel. The interesting thing is that most owners who take the time to personalize their bat, place their name here. Instead, this bat reads, “Luke 1:37”

Now I can’t say for sure that this bat belongs to Bryce but the message was intentionally sent, “For nothing is impossible with God.”

I bring this to your attention because society seems to adore raw talent yet it ignores the fuel that runs the engine so to speak. An athlete under the kind of pressure Bryce Harper is under has to have a foundation otherwise the first storm that comes along will blow him away. I would submit to you that Harper appears to not only have the talent but he’s got the makeup to succeed in professional baseball. What teen could be so humble as to take the focus away from himself and place it on a belief system on the cover of one of the most important baseball media outlets? I mean, that takes real guts if you ask me.

See if you can apply that to your situation.[/quote]

Religion completely aside…I think the kid has done alright by himself so far. Many will try to make him into a hypocrite but at some level, we all are. He’s going to make some mistakes. He plays the game like it’s his last meaningful act on earth. Poor Cole Hamels intended to put him in his place and all he did was lift him up on a pedestal. I’m thinkin Cole would like to have that pitch back.

Harper is the best prospect the game has seen in decades. He absolutely dominated a Juco league at 17 years of age.

What were YOU like when you were 17? Now think about what you’d be like if you were one of the best - possibly THE best for your age - at the game you loved so dearly.

I’m not saying his swagger shouldn’t rub people the wrong way; clearly it does. But I’m saying that I’ve done a lot more stupid shit when I was 17, and I bet you did too.

Puts it in perspective.

As the ump would say…“Play on” both guys are doing what they have to do…my comments not out of disrespect but acknowledging the facts of baseball life…swagger, be cocky…get plunked…if his press is anything…Harper is down to earth and a kid loving his place in life…right on…Hamels…someone dropped the middlefinger sign…he did his job…the only “outrage” is that he broke the code and admitted what we all know…guys get plunked…Jimster…that is old school…if you get that sign and don’t, you’ll be made aware of the mistake you’ve made…by your team-mates…the game is policed by itself and it will always be this way.

I just would intentionally throw way behind someone. That gets the same message across as actually hitting him would. Plus you don’t have a runner on first now that is just itching to steal home when you throw to first.

But that’s just me. I hate getting hit myself and I know how much it can hurt. I cant imagine how much it hurts to get hurt by a 90 mph+ pitch.

I just would intentionally throw way behind someone. That gets the same message across as actually hitting him would…

It doesn’t send the same message.

Hitting a guy and throwing behind a guy are two separate things.

I just like hitting people for any reason, but that’s just me.

You’re in College the team your facing has a pitcher who has drilled your number 4 hitter after hitting a bomb and pimping it. The bottom of the inning its their number 3 4 & 5 guys your Coach pulls your pitcher after he walks the number 3 guy and subsequently serves up a beachball to their number 4 who goes yard and then pimps it. Your Coach brings you in from the pen and gives you the ball, what do you do if you don’t drill the number 5 guy? What do you do when you face their number 4?

How do you handle that?

Or my personal favourite, this happened to me as a Freshman.

Our SS and their DH were tied for the lead in the conference for HR. Their guy goes and hits 2 in a row Coach calls me in to face and him and his exact words were “Well we’re gonna lose this game but I want you to make sure we don’t let this guy run away with the HR title, I’m going to fine you 20 bucks for every strike you throw to him”. What do you do?

It was fun to watch what guys did after I was done facing him. I drilled him in the ribs and got a pat on the back from the Coach one guy walked him another guy hit him and the last guy threw one down the middle and got fined 40 bucks!

I don’t know. I wouldn’t throw him a strike for sure. I would probably just throw everything up in the zone.

Someone has to show class. I would sleep better at night knowing that I didn’t throw any pitch with the intention of hitting someone.

Absolutely agree. Harper is a hugely talented guy with a big ego. Seriously how could he not. He’s dominated every level he’s played at and it appears he going to dominate the bigs for a long time.

That being said, he is definitely going to rub some players the wrong way. Face it he will get plunked from time to time.