What is the center of rotation/axis of the shoulders? The glove side? The spine? Both (with the spine acting as a hinge/scap load)?

Cool gifs. Ask it a little differently so we understand a little better what you’re asking.

This is just a guess
.

If, as Atwater suggested, energy is transferred from the ground to the wrist by a series of acceleration and deceleration of joints moving from proximal to distal positions, my guess would be that the center of rotation is the thickest portion of the spine just above the pelvis. This portion is accelerated sideways towards the target at drive/stride. At foot strike (more or less) it is rotated towards the target and thoracic extension/contraction is employed to assist the internal rotation of the throwing shoulder. So at that point the shoulders are rotating around the spine but the energy path may be more up the spine and through the shoulder. The upper arm is moving at max velocity before braking at elbow extension (just before) to accelerate the lower arm.

Now I think many younger pitchers feel that the center of strength is located in the non-throwing shoulder and they initiate rotation by pulling or opening the non throwing shoulder. Your GIFs also give this impression the way the line is drawn. It is very cool. How did you do it?

I don’t feel the trebuchet is a good machine to illustrate the throwing motion. A whip or a fishing rod might be a better tool. If the rod were jointed you could really model the throw better.

I do not really know though.

Is any of this related to your question?

I think it’s clear the throwing arm is initiated by the glove shoulder/scap at least in some pitchers (it’s not just “blocking” or passive, but helps launch it). See this:
http://www.drivelinebaseball.com/2013/08/16/disconnected-pitching-mechanics-a-good-thing/

It also seems like it creates an axis of rotation/fixed point to rotated around since it actually stops rotating while the arm keeps rotating. The throwing shoulder/arm also rotates around the spine like a hinge (spine is the joint in the hinge).
Again, not all pitchers do this.

[btw the way I created these is by creating a gif, taking apart the frames and then tracing the arms, ball, glove and shoulders in each frame, and then put it back together…it’s a pain in the butt (and why they come out pretty ugly)!

I prefer to say we rotate around the trunk (because we don’t “feel” the spine like we do the muscles of the trunk, I think it’s tougher to teach kids this from a coaching standpoint using teaching cues in a bullpen setting).

This is why side planks and med ball exercises are such a great strength stimulus for the improvement of more explosive mechanics, right?

I’m not sure from a teaching standpoint whether throwing around a fixed glove side or pulling the glove back toward the body matters. I’ve seen pitchers essentially use both cues and get similar results. Video and your gifs (which are awesome!) tend to show the glove stays stationery, mostly, but if you ask many pitchers, they “think” they are pulling the glove back to their chest.

This is a great topic. From a teaching perspective, in simple terms, what do you encourage? I think this could be helpful for parents looking to help their son.

I think the scaps can work in a segmented fashion. The glove side initiates, and then the throwing arm scap follows. Separation between the scaps (like hip/shoulder separation or other muscle groups…the shoulders don’t have to rotate as one unit, but can by more “whippy”…you clearly can move one scap without moving both). That’s why some pitchers look like they’re pulling their glove. Once the glove side fires, it’s setting a plane of rotation, and once it’s done, the throwing arm rotates like hinge around the spine. I think this might be the most efficient movement, but I don’t necessarily teach it to everyone, because it depends on how they move in general and how advanced they are in other areas. I don’t think ALL pitchers do this or even need to do it, but it’s an interesting concept, and explains why some teach or feel like they’re “pulling the glove” (I think it’s not really pulling the glove as much as it is firing that scap/lat out of plane). Paul Nyman has a concept called a “fishhook” in hitting and I think this movement in pitching can increase angular momentum, as Kyle has pointed out.

Nice work. They are very effective at making your point.

So if the non-throwing shoulder were being driven down and around by the abdominal rotation and the throwing side, how would it appear differently? The gif doesn’t show the hips going from closed to open which is thought to be the main driver for shoulder rotation by far. Try initiating shoulder rotation without hip/shoulder separation or thoracic extension and you can get a feel for the difference in magnitude of rotation velocity created through the different mechanisms. Notice also that thoracic extension creates both a bow across the shoulder girdle and a bow up the spine. If the lead shoulder is a source of energy for the throw it is outside of the main kinetic chain.

I remember the article when it came out. I am still unconvinced either way.

Nice. I agree that the scaps can move independently and really like your description of the non throwing shoulder setting the plane or contralateral tilt. I also think that the tendency to pull with the glove side can negatively impact ability to locate.

The resulting 35 mph pitch was out of the zone. Maybe that is where Lincecum picked it up.

I just don’t see how one can get this (House), from looking at high level pitchers. Based on my research, FAR more high velocity pitchers do the “incorrect” position, and use their glove side to help generate velocity. In fact, I think it’s safe to say that at 6’10", Randy Johnson got away with tons of things you wouldn’t teach smaller pitchers.

I asked a physics grad student what he saw in those gifs/drawings (not a baseball guy)…he said, in his words:

I don’t think the picture is a true representation on Johnson either. 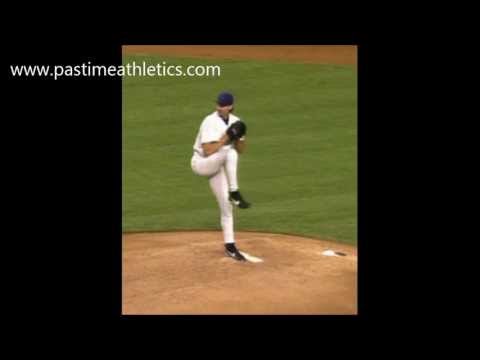 I do think though that with focus on “initiating” the shoulder rotation with a pulling of the elbow/glove, in an attempt to create more velocity, it is very possible to prematurely disconnect the shoulder rotation from the hip rotation, which reduces velocity, and is known to place more stress on the front of the shoulder. It is one thing to “disconnect” the glove scap to allow better thoracic extension and clear the way for the throwing shoulder, and a different thing to try and pull the throwing shoulder through with the glove shoulder. I don’t really feel that happens much, partly because they are as Kyle says “disconnected”.

I give you the following calculation as evidence.

Your post of Yuna Kim piqued my interest and I found this link. It is a commentary on her Lutz by her coach.

My take away is that the energy for her Lutz comes from her pre launch speed and that her rotation and lift are both initiated through her toe pick. Her arms need to go from extended to close in order for her to rotate as quickly as possible. Much of that description seemed fairly analogous to pitching.

I think we’re on the same page. It’s a scap move.

I saw Boody tweet a couple weeks ago that staying closed is all about the back shoulder and teaching to stay closed with the front shoulder is one of the worst teaches. So is the disconnect with the delayed external rotation truly initiate rotation?
Really interested in the sequence from SFC to release.