Evan- Just turned 13. 5’10" 145 lbs. Had him at 74 mph today. Concerned about too much external rotation and elbow health. We’ve done nothing to increase it, his natural arm motion.

Looking at it, it’s parallel to the ground but he also has a lot of forward lean that changes the angle to the body. Also, he’s supinated at MER. Thoughts??

That’s excellent! Look at the small guys in the MLB who throw hard and tend not to get inured, they supinate in external rotation. Your son has great trunk tilt and external rotation, with supination which protects the UCL. Do NOT change this!

He needs to work on the bottom half.

If he’s been throwing hard/pitching since he was younger, he likely has a natural twist in the upper arm bone, called Humeral retroversion. This is a natural occurrence. His IR will look less than the opposite arm, but as long as his total arc of rotational motion is equal, he should be fine (re: range of motion anyway). Take him to a good sports PT who can measure his total arc of rotational motion, active and passive ranges. Google “ABPTS” and find a sports or orthopedic specialist close to you.

Curious if flexible shoulder joints can have genetic component?? I was D-1 Swimmer and had (have) very loose joints. During H.S. and College career had to work on keeping shoulder strong. Could take shoulder out of joint on command. No pain just very flexible in shoulders.

Would be interested to hear what pitch he was throwing in that picture. Supinated at MER is where you want to be when throwing breaking pitches.

youre also supposed to supinate when throwing fastballs - it’s just not as much as the breaking ball. It’s healthier on the elbow. 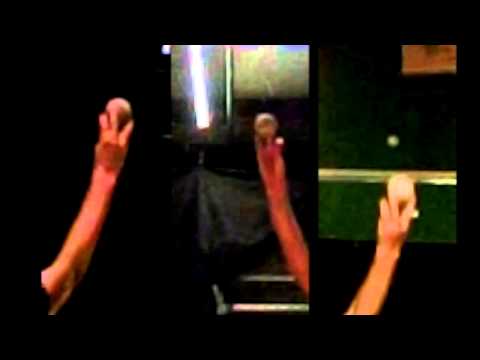 heres Trevor Bauer doing it on a fastball.
Here’s a medical study:
http://eds.a.ebscohost.com/abstract?site=eds&scope=site&jrnl=10658483&AN=20725460&h=JGDfm%2FI4ATjHpVxmM7X76z7kiGWP9h7qzujasXzT%2FIBwukXzsKL%2BX480GO0iDgJB2VIULtE2eNEo2lKhNiOiIw%3D%3D&crl=c&resultLocal=ErrCrlNoResults&resultNs=Ehost&crlhashurl=login.aspx%3Fdirect%3Dtrue%26profile%3Dehost%26scope%3Dsite%26authtype%3Dcrawler%26jrnl%3D10658483%26AN%3D20725460

Fastball is what he was throwing. What keyed me to look at it was his fastball cuts at times more than others.

Thanks a ton. I’m a science based guy. When I analyze video for swimmers (was d1 back in day and consult a bit now) I look at 2 things. I look anecdotally at elite comparison and at studies or the physics.

Glad to hear you’re a science based guy! The baseball community needs more science based people - a majority of the coaching is outdated and shown to be ineffective my science.

Why would you not want to be in that position when throwing fastball??

Straight-up fastballs are NOT supinated pitches. (Cut fastballs can be slightly supinated.)

It looked like his hand was supinated in his fastballs to me. Ill have to look at it again, considering you probably have a much better eye than I.

The medical study saying that the forearm was supinated in the FB, just not as much, would definitely be a batter reading. It said This:
“The motion of supination/pronation of the forearm and dorsiflexion/palmar flexion of the wrist prior to the ball release; the forearm was supinated more in the CB (maximum supination: 39.9 &plsmn;6.0° at 0.072 &plsmn;0.045 s before ball release, or BRL) compared to the FB (19.4 &plsmn;8.5° at 0.076 &plsmn;0.046 s before BRL)”

unless the readings they gave for the forearm mean neutral, because the arm is already supinated to lay back?

(Even though it’s pretty much entirely what I’m unintentionally doing) - I don’t mean to try to “prove you wrong” - just trying to elicit discussion on this.

I don’t know how to interpret the numbers so all I get from the study is that the forearm is supinated more with the curve than with the fastball which I already knew.

So wouldn’t “supinated more” mean the arm is still supinated?

I’ll try to research it and find what the numbers mean.

Yes, “supinated more” could still mean supinated. But I have never previously heard of a fastball being described as a supinated pitch. The purpose of supinating a pitch is to add a lateral spin component to create movement. In general, a fastball is a straight pitch. Again, in the video, I see his hand behind the ball (i.e. no supination).

I guess there’s only one way to find out; I’ll have to research what the numbers mean and get back to you.

Usually neutral is the angle one has when the arms are hanging by the sides with no muscle activation. There may be some supination at MER for the fastball but forearm muscle activation should already have begun to protect the ucl.

I believe the thrower in the picture is likely in an unhealthy position for a fastball. He should be working on a fastball that comes squarely off of both fingers. Throwing a cut fastball every pitch will probably put too much stress on his elbow.