I know this isn’t pitching related but there are a lot of great baseball minds on this website. My little sister will be playing softball soon and I was wondering if we should make her a lefty or righty batter. She is naturally right handed and throws right and I didn’t know if that would make a difference. I’m thinking making her a lefty would be good but I’m just wondering.

Ok, thanks for the advice!

No reason to make her a lefty especially if she isn’t naturally pretty ambidextrous to begin with. 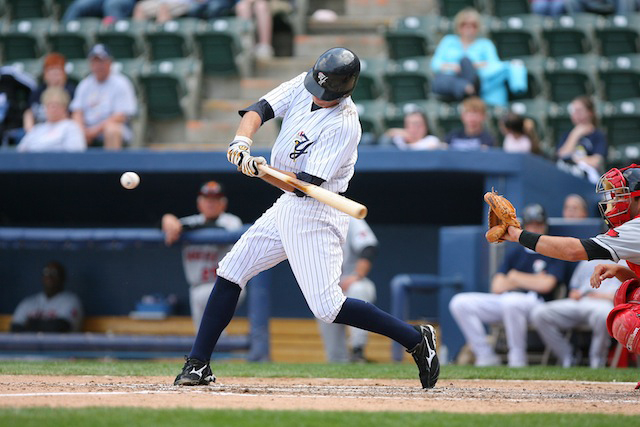 Advantages of Being a Left Handed Hitter

I found the above article useful. I also have observed a lot of RIGHTIES who are batting LEFT in youth and little leagues nowadays.

I began training my son to bat LEFTY since two years ago. I found that it not only balanced out his body growth, it actually improved his BA on the right side.

It’s softball. If she wants to play at a competitive level and she has any speed at all, she will have to learn how to bat lefty and slap hit.

I may have posted this a few years ago.

A batting coach for a club in the Frontier League told me that some of his players came to him swinging lefty during BP, threw RH, and batted RH during game time.

“They had remarkable perception and bat control”, he told me. I asked him what was the deal with the BP? He told me that some batting instructor trained many of them to bat left handed during BP, and by doing so, they were less concerned with parking the commissioner’s signature out by the bus lot, and more concerned with the discipline of body/hand’s control.

The end result transferred itself to that mental awareness in real time, during game time, quality contacts, better placement of the ball upon contact, and a much higher on-base-percentage. “Oh really,” I said to myself.

It’s that high on-base-percentage that really worries a pitching coach to no end, and has the club’s skipper working his pencil all nine innings.

Now to be totally honest, I never heard of such a training method, nor do I know any one, then and now, who has used that method. Sounds interesting enough though.

Coach Baker, thank you for sharing. I am happy to hear someone else “validates” my odd method.

I was going to “keep this as my secret”, but then I like this forum, I guess I have to “share”.

I am not a doctor and I also don’t have enough statistical data to validate this theory. I trained myself this way, and I found that it was super difficult for me initially, because I am a RIGHTY. However, when I switched to my natural RH position, it became so much easier. My own explanation was that the “brain was fooled” to do something unnatural. Then it later see my normal swings, it self-corrected back to its normal state, but worked more efficiently than before. This method worked well for my son. The goal is not to make him a switch hitter, even though he can bat well LEFTY. I am aiming to “balance out” his body from a purely physical training aspect. It’s like the Chinese saying, “too much Yin and not enough Yang, would ruin any good thing”!

Oh, I almost forgot too. I believe everyone has a “lazy eye”, because that is how our brain is “conditioned”. My son used to have trouble against LH pitchers. This is no longer an issue for him. He has learned to read pitches with both eyes now.

Do you have your son throw with both arms to balance out the body?

Jchap, the honest answer is YES. Even I learned how to pitch LEFTY as well. It gives us a total different perspective. Being so RIGHT side centric, my son actually had a slight neck discomfort. The doctor diagnosed it as shoulder imbalance. I am not sure if pitching LEFTY helped solving the problem, but when I caught for him, I actually observed faster velocity. The only thing I can think of is that his LEFTY arm is like a NEW ENGINE and RAW. Someone might argue that a well ran machine should work better than a new machine. But I know what I saw. I never bother to clock him for either side, but I estimated at 75-78 mph for a boy at 14.5 year old.

I just enjoy practicing with my son. I hope that one day I will have actual data to prove what is working or not working.

PS. - his pitching coaches, Ed Collins and Andy HIgh, who both pitched for the Brewers, are excited about his LEFTY skill. They think with consistent practices, he might be game ready in 2-year. He will be a sophomore in HS. The only downside is TIME and MONEY. It takes extra efforts or away from RIGHTY practice. For now, we just think it’s cool and treat it like a novelty.

Sounds interesting, please keep us updated on your son’s progress.

Jchap, I certainly will. I am proud of my son, but I am not really into bragging. I was just curious from purely a scientific approach to see if trying something different works or not. But mostly it helps to keep practice more interesting, we all hate practices.

A few years ago, my and I stumbled into a popular Japanese baseball animation, Major (manga) - Wikipedia

We watched it online since it’s not available in US. We were hooked on the stories and the main character was a phenom since he was young. He ruined his right arm from overuse. Then fast forward a couple years, he entered middle school. He reignited his passion for baseball and joined the school team. But he has trained himself completely from RH to LH. The story continued when he competed in the cut-throat Japanese HS system and then came to America to fulfill his dream to play in MLB. The story was well written and we simply could not stop watching for the long 7 seasons.

My son ran into pitch count issue when he was in little league. So, we joked about having the ability to double the pitch count with opposite hand. It started out weird, but after 3-year of fooling around, it finally started to take shape. Again, the goal is not for him to become a major leaguer. He likes baseball and we just want to have fun with it.

In basketball in HS, our coach had us shoot some lefty out to about 15 feet… and for free throws. Why?? Because focusing so much on proper technique for left handed transferred to better form right handed. Plus it gave me a deadly little 6-8 foot let handed turn around jumper ;-). I suspect the same maybe true for batting, well except for helping develop a turn around jumper!!

I didn’t try this switching thing when I was younger. Now, I am an old fart, I have good control of my body. When I struggled with my LH, it became so much easier immediately after I switched to RH. I suspect it has something to do with my “brain function”. Unfortunately, I am not a neurosurgeon, I don’t really understand how my brain works. I just called it “fooling my brain” by starting out a more difficult task, which will make my brain worked harder initially. After the switch, it’s easier for the brain to handle the easier task.

Another example would be like “priming an engine”, it takes a little extra effort to kickstart. After that, it’s cake walk.

Very interesting. Looks like you might be on to something. RHP definitely looks like he is getting more full body involvement leading to more power. But LHP is coming along well. I say keep it going and, he’s only 14 yrs old.