Does anyone know of some good baseball movies?

Are you talking instructional or entertainment?

ive seen all of those except for field of dreams…thanks

Well do yourself a favor…See Field of Dreams
Also an old movie that is really good is “Fear Strikes Out”, it is the story of Jimmy Pearsal

Don’t forget about “The Natural”.

You should see this movie. 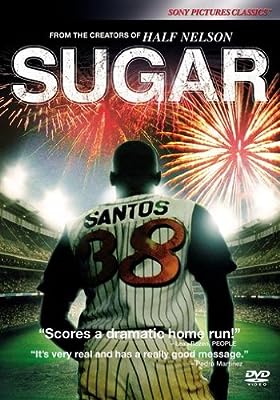 Sugar is the inspirational story of Miguel Santos, a gifted pitcher struggling to make it to the big leagues of American baseball. Nicknamed "Azúcar" (Spanish for "sugar"), 19-year-old Miguel travels ...

It doesnt come out till’ sep. 1st

but it is a great movie, it is about the domincan life of playing in the minor leagues, and all the struggles for the road to the show.
It is mostly in spanish, with subtitles, but a great movie.

This is a good list. Perhaps some good Christmas gift ideas in here for the fellow baseball fans in our families…
I would add:
Sandlot
42
Little Big League

The Sandlot. Great for the family; never tire of seeing it.

I’m sure there’s many more but those are the one’s I like.

I loath most sports movies.
At least ones that try to focus on the sport being played. The action scenes are usually so lame and fake it makes me crazy.
Eight Men Out, Sandlot, Bull Durham ect, they all have their moments. A league of their own, same thing. But, generally, story telling with the sport as the backdrop. Moneyball I really enjoyed, but, even then they conveniently focused on what everyone can understand…hitting. No mention of Zito, Mulder and Hudson? Come on man.

The Sandlot. Great for the family; never tire of seeing it.

“There’s no crying in baseball!”–Love that Line! He delivers it so incredulously. I always laugh my ass off.

“Say it ain’t so, Joe.” Is it wrong that I was rooting for the White Sox players to get off the hook with the commissioner?

One summer ball game my son Sophomore year of high school we lived about 2 or 3 miles over a hill from the school. We were waiting for the game to start and he comes riding over the hill on his dirt bike. Baseball pants tucked into riding boots, baseball jersey on, backpack with spikes, glove and hat…riding the dirt bike to your baseball game…I thought, man, life is good, gotta love the summer time.