Here’s a couple pitches from my son’s 2010 season opener. He’s 9, almost 10, years old and has received little to no actual coaching. He’s about 4’7", 60lbs and throws low 50s. Any advice would be greatly appreciated.
Hopefully I’ll get some better video next weekend.

His glove is too big. Other than that he looks like he’s got it goin on 8) .

He does a lot of good things for his age…

I love his step back, and he leads well with his hip (two things you don’t see a lot of little kids doing). He also has a nice stride.

Two things he could work on: he turns his back knee in way too early - have him try to keep it over his back ankle longer. He also hooks his leg during the lift - it is likely the reason why he spins off toward 1st base after release. Have him keep his lead foot under the lead knee instead of hooking it.

I had the exact same thought as JD - the glove is too big. Actually, it’s too heavy and it leads to him dropping the glove which can effect posture and timing of shoulder rotation. Ideally, he keeps the glove up in front of him through ball release.

Thanks for the quick responses and advice. I agree the glove is a little big, it’s a 12", but very light for the size. It’s the Nike Pro flash they made for JRoll. It works okay when he’s in the outfield or 1st base, but it does look pretty crazy when he pitches. He’s got an 11.50" he used last year and I think he’ll go back to that next game.

Keeping the back knee over his ankle longer, and not hooking his lead foot are great tips, he would never receive from his coach. Thank you.
He’s got a game Friday night, we’ll see what happens.

Here’s two pitches from last weekend’s tournament. They went 3-1, and got 3rd place. He went back to an 11.25" glove. We talked about not hooking his lead foot, but it’s going to take some time to see it in games.

He struggled with control, but eventually settled down and closed out this game. I’m not sure what type of drills he should do to get a more consistent release point. Any suggestions would be appreciated.

The 2nd video is him throwing from the stretch. As always, feedback is appreciated.

Here’s a sequence from last week. As always, comments and advice are welcome.

try to place the glvoe around your chest

Why not? He’s a small guy who can throw mid 90s. Just because he stabilizes his glove lower doesn’t make it wrong. 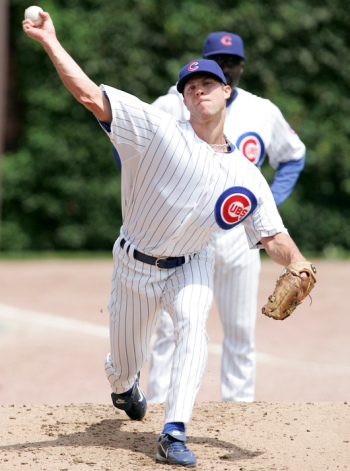 They look the same, except that harden’s glove is facing up while Maddux’s is facing down

JD and Roger nailed something important…your son’s glove isn’t “a little too big”, it is way, way too big.

My 15 1/2 yo HS pitcher is a little over 6’2", weighs 185 lbs, and his glove is very much smaller than your son’s…the smaller/lighter glove the better for dynamic balance between the throwing arm and glove-side arm throughout a pitcher’s delivery.

One thing I noticed is that he rotates his hips and shoulders at the same time. In other words he doesn’t get any hip-shoulder separation.

Normally I wouldn’t go into that with a 9 yr old kid, but since his overall mechanics are very advanced already I think it might help with consistancy.

Here’s a video of Roy Oswalt (yes, I really like his mechanics) pitching. Notice how his hips rotate while his shoulders remain “closed” to the plate.

So if you want to try taking your son’s mechanics to another level suggest you start focusing on his kinetical chaining.
Again, this is pretty advanced for his age but I think he could even be ready to take the next step.

Here’s a video of Bartolo Colon pitching. The thing to focus here is on the way he uses his legs and rotates his hips before shoulders. Best seen on slow-motion replays.

Usually this adjustment helps pitchers to throw more relaxed, give them better accuracy and consistency aswell as recude stress on shoulder and actually gives them few mph’s in the best case scenario.

Here is some explanation about the kinetic chaning/linkin. The videos are about martial artists but the same laws of physics apply to throwing a ball. Fastforward to the end parts of the videos.

Thank you, antonio. His coach doesn’t get alot of time to work with individual pitchers, so your advice and explanations are appreciated.
Do you, or anyone else know of any drills we can practice at home that help develop the hip/shoulder separation?

Here’s one drill that can help to isolate the phase of the delivery when the hip/shoulder separation happens.

What to look is not so much the “laces down” and pitching blindfolded, but more of the position the pitcher takes, how he leans back to get momentum and the execution.

What you need to do is to concentrate on practicing the hip/shoulder separation in this stride position. This eliminates the rest of the delivery to help focus on a single task.

Few tips:
Note that the idea of the hip rotation isn’t only to rotate horizontally.
You can test it by trying to do so in the position shown in the video. You will notice that when you implement only sideways movement the hips will more or less stop when they’re pointing directly to home base, but I’ve found out that if you “sit” on your left buttcheeck this allows you to rotate the hips even further. I really recommend you to try this because you can get 10-20% more hip rotation if you allow them to continue their rotation a little bit downward after they’ve reached the maximum horizontal capacity.

Hard to explain but I recommend to try.

Also stretching the core, gluteus and legs helps a LOT.

the first video with outside strike kid,

(you can also examine yourself but watching the height of your front leg to show the stride distance, as the current video as we can clearly see that the front leg is very high like some fielders throw the ball, not pitcher who is pitching on the mound)

by the way i like your pendulum arm swing action