Talk about what desire is…30 years ago this man threw a perfect game.

We never hear this guys name…he is an all time great.

We still occasionally talk about him in my house…plus, I bought the DVD set of Yankee perfect games and no-hitters a few years ago…Abbot’s is in there, not “excerpts” but the entire game…

The collection is very cheap at about $30. Don Larsen’s WS perfecto is also in there. 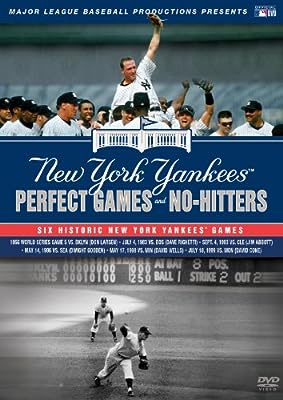 An extraordinary compilation of baseball history, individual intensity, and the unbridled joy. This remarkable collection features perhaps the most pressure-packed pitching performance ever -- the qui ...

Here is another terrific DVD…I still loan it if asked…

That’s a great story. Thanks for posting it, JD.

Correct me if I’m wrong but he went straight to the show right out of College didn’t he?

Right after the Olympics…I remember it was a national fascination with the guy…America allowing someone who shouldn’t oughta get one (“You know those handicapped just need to be patted on the head”…that was the paradigm at that time), a chance…and that person taking it for all it’s worth…he still does as a motivational speaker. We could use boxcar loads of this guy :cap:

I posted the story before on here but I will revisit it. My sons Babe Ruth team played another team the next town over when he was 14. The other team had a third baseman that had one hand. He was so smooth with his glove transition I didnt notice until the second inning. It only caught my eye because I noticed he had his glove on his right hand during warm up between innings…a left handed third baseman?? No. Something much more special than that. The kids noticed quickly enough. By the time the game was over he had earned everyone respect. No hits swinging one handed but he fielded everything and gunned the ball over to first. In the post game handshake he got a few pats on the back extra and even a couple of hugs from my sons team.
On the drive home the discussion turned to how many snickers, putdowns and doubts this kid had to deal with during his time coming up through Little League and Babe Ruth. To keep what he wanted to do in his sights and get there was fantastic. A great lesson to the boys about not prejudging people and also a lesson in emotional toughness and determination.
As a dad, this young man is one of my very favorite memories from youth baseball.

When I was in HS we played a team that too had a player with one hand a second basemen if my memory serves correct.

Much of your story is echoed through my own memories of playing against that particular team.

Nate Muehe goes to school with my daughters. He is also the player in the Nike commercial. Very good pitcher.

“Some people are told they were born with greatness. Some people tell themselves.” ***** The Olympic Games tell great stories. This summer, one of our own Kansas City kids will have his own great s…

Met the kid several times. If he stays in the game he will go places.

A couple years ago I pitched against a team with a guy that had one hand. He ended up hitting a triple off of me, and I didn’t notice that he only had one hand until after the game was over.

It isn’t that Jim didn’t have precedent before him;

Monty Franklin Pierce Stratton (May 21, 1912 – September 29, 1982), nicknamed "Gander" for a trick pitch he developed), was a Major League Baseball pitcher. He was born in Palacios, Texas, United States, but lived in Greenville, Texas, for part of his life. His major league career ended prematurely when a hunting accident in 1938 forced doctors to amputate his right leg. Wearing a prosthetic leg, Stratton played in the minor leagues from 1946 to 1953. His comeback was the subject of the 1949 f


), he shot himself in a hunting accident and came back…and hopefully any who reads this knows the story of Dave Draveky…

Dave Dravecky in a Journey of Hope by Exploration Films - Dailymotion

)…"So What? You prove them wrong :shock:

I don’t know, Brown’s missing finger may actually have contributed to some filthy stuff…certainly not the same thing as playing MLB-level baseball with only one complete arm.

Dave Dravecky’s comeback from cancer is an amazing tribute to human courage and fortitude…in fact, I was priveleged to see his comeback game against the Cincinatti Reds @ Candlestick in person. I do not believe there were any dry eyes in the ballpark that day, with the exception of Reds manager Pete Rose whose team lost the game. Rose’s post-game comments were clear—he didn’t begrudge Dravecky’s return to the mound after the year-long hiatus for cancer treatment…but…at the same time he was not happy that his team lost the game and he pointedly declined to act warm and fuzzy about the Giants’ fans happiness.

Unfortunately, in Dravecky’s next start the stress of pitching proved too much for his cancer-treatment weakened arm…his humerus bone snapped during a delivery and that was the end of baseball for him.

There is something truly remarkable about a Jim Abbott who, from birth, could never really be expected to develop and compete in sports at the same level as peers having two complete arms. That he was able to overcome a ‘one-arm handicap’ growing up and then take a place among the best baseball players in the world…well, that is just a very, very rare and profound story.

and then there is THIS guy;

"Dempsey was born without toes on his right foot and no fingers on his right hand. He wore a modified shoe with a flattened and enlarged toe surface. This generated controversy about whether such a shoe gave a player an unfair advantage. When reporters would ask him if he thought it was unfair, he said “Unfair eh? How ‘bout you try kickin’ a 63 yard field goal to win it with 2 seconds left an’ yer wearin’ a square shoe, oh, yeah and no toes either”.[3] Additionally, when an analysis of his kick was carried out by ESPN Sport Science, it was found that his modified shoe offered him no advantage - the smaller contact area could in fact have increased the margin of error.[4] In 1977, the NFL added a rule, informally known as the “Tom Dempsey Rule,” that “any shoe that is worn by a player with an artificial limb on his kicking leg must have a kicking surface that conforms to that of a normal kicking shoe.”

It all goes to a discussion we were having;

These guys who have such desire to do things…as Frank Zappa said…“Maybe they shouldn’t oughta be doing”…where do they fit? They did the hours because they couldn’t do anything else…driven by desire…They walk amongst those “normal” humans…us :lol: