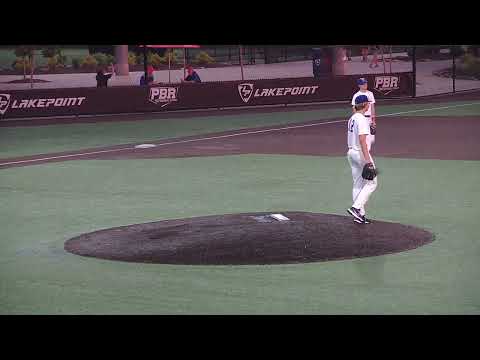 Ranked #1 Lefty in Alabama by PG for 2025 class
However sits low 80’s and tops 85/86
His velo is keeping him from getting the big offers he wants.
I feel there is untapped velo in his lower half.

Have you noticed lately many of the players showing up at higher levels are striding shorter, staying tall during ball drive then recovering tall ! ? The baseball establishment is leaning towards this approach because the leading kinesiologist on overhead throwing said velocity increases will be seen when baseball pitchers learn how to powerfully rotate from their glove leg instead of their ball side leg.

He predicted up to 110 MPH’s with a few when this happens. Here is why.

When you perform by striding forwards from a “splits” posture you end up striding much further forwards than a normal trotting gait because you are bounding down the mound with one driving movement that has you limit your body rotational ability, limiting Velo.

When you walk straight down the mound with a trotting width gait effort the first step is shorter but it allows you to use the next step in the delivery also, now who’s stride is longer. This allows you to conclude your ball drive while still body rotating and it is powered by the way we walk , trot and run.

Right now this pitcher collapses his glove side knee, turning it into a stress absorber like a shock absorber instead of a solid structural base from which to contract rotation against when you fully extend the knee. He basically uses no rotation in his ball drive, he uses tension angulation of the body where you see him recover by bending his back radically to recover.

Curious of height and weight, how strong is he. How much can he lung (reverse and forward), split squat, bulgarian squat, deadlift and how many body weight chin ups (palms toward face). From the video looks like he might have a lead leg blocking leak. Hard to tell about posture from this angle. The quickest way to increase velo other than mechanical tweaks is through increased strength and body weight. It could be as simple as getting into the gym. Many of the HS pitchers I see that make velo increases of 5+ MPH put down the glove (particularly in the fall) and hit the weight room hard.

He is 6’-4" tall and 205 lbs. He loves working out and has followed the BRX program for about 9 months. I do not know all the particulars you asked but his deadlift is 360 lbs. His stride is extremely long and i think there is something to lead leg not being stable and his hips not opening.

Curious if you have seen the 90 mph formula from Dr Heenan? My son who is 5’11" hit 90 this last HS season as a 17year working toward these metrics. He was stuck for 2 years with a top velo of 85 until he worked to achieve these metrics.

Another option I would recommend is a company called Tread Athletics and Cressey Performance Center. Both tend to have a lot of free stuff. You can probably do a search online for more info.

Now compare your son, who does not sit or squat, nor does he stiffen his front leg as Verlander or any other hard thrower does, Have your son mimic these movements, and his velocity will increase over time.

He must squat or sit and stiffen his front leg by rotating his back hip after the front foot has landed.

Watch the video, slow it down, and stop at each point of Verlander’s Squat and bracing of the front leg.
//www.youtube.com/watch?v=jY1aUEztNi8

Have him stretch and become as limber as a noodle, increasing his velocity.

Please post a video after he corrects these two things.

It appears he doesn’t get into his back leg much. There’s a ton of untapped velocity there.

Here are some video links from YouGoPro Baseball that do a good job explaining how to use the legs.

Lots of problems in the delivery start upstream and work downstream. He starts with a coil in his leg lift which helps him get into his hinge. High-level pitchers that coil though either or maintain posture of the spine and or are elite at holding the hinge, The problem a coil can create if you don’t do these things is the front leg takes over and starts to reach. This causes the spine to tilt you can see the slant in his shoulders. The only way to get out of this hinge is to push and get into hip extension. When he gets into hip extension the hips stop rotating and by the time he clears his hips he’s already lost tension in the trunk. With this linear vs rotational move what happens at footstrike is his front hip stops rotating which causes his torso to crash and stop rotating as well. The front hip rotating creates the lead leg block and allows the spine to continue to rotate. High-level pitchers finish with their chest facing the glove side dugout. You can see he doesn’t. This all starts from the beginning of the delivery. The best advice to start is eliminate the coil in his lift. Move to a straight up and down leg lift and work on keeping the spine vertical (shoulders flat). Another thing I would suggest is starting in a hinge in the back leg and continuing to hold that hinge when lifting the leg and the whole delivery. See how tall the back leg gets during the leg lift. A lot of pitchers start in a little bit in a hinge and hold it or even sink deeper in it. Start in a hinge and start moving forward right away while staying in the hinge throughout the delivery. This will allow the hips to rotate better and will be a good place to start.

I can definitely see some of the things you are talking about. He does seem to reach with the lead leg and lack rotation.

Has he been told to lead with his front hip before?

Yes as a youth he was to taught to show his back pocket and did numerous Hershiser drills with his butt hitting the wall. A large emphasis was put on stride length also.

If you look at his lead hip it rides the slope higher than his back. This makes it really hard to rotate as well. Check out this video of Trevor Bauer Trevor Bauer Slow Motion Pitching Mechanics Baseball - YouTube. He has really good mechanics not perfect mechanics, but I really like his first move. Knee to straight up to the hip and down back hip is controlling the move forward and even though his spine starts to tip back, you see his belt buckle stay even. The t-spine is creating his tilt not the hips being uneven. Keeping the hips even allows him to rotate well. A good drill is to start with the throwing arm side of his body against the wall. Have him lift and go without his spine touching the wall. Another way to do this is from behind him put a pvc pipe or broomstick on his back shoulder to start not letting him hit the stick. I think staying vertical in the spine will help him a lot. And the middle of the body has to start the first move though not his front hip.

And Stride length is great it give the hips more time to turn, but if it’s too wide for him to stabilize and rotate around it’s not beneficial. You can create all the momentum you want but if you aren’t able to stabilize it when you land you lose out on energy. His stride length should be as long as possible while still able to stabilize and rotate into finish properly. To help him learn how to finish properly have him in footstrike position. Hips open shoulders closed. On the toes of the back foot. Have the pvc pipe or broomstick across his front knee and have him throw and not hit the stick. This will force the hip to rotate back and allow him to learn how to rotate. 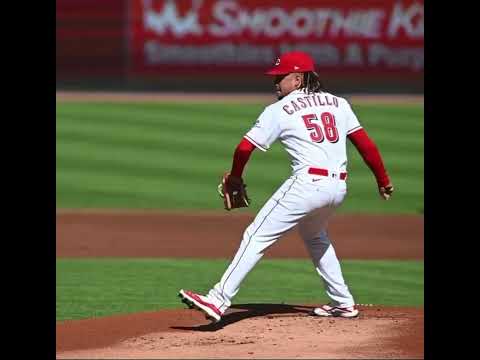 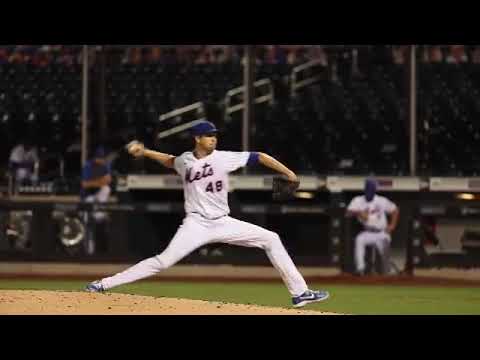 Looks to me like he’s quad dominant, not sitting into glutes. Therefore he’s really extended at foot plant and that’s making it really hard to get hips through, gain real separation and transfer energy up the chain.
In order to sit well into glute you need the strength, so make sure that’s not lacking. The body won’t let you get into those positions if it feels you can’t handle them. (body protects). You want to sit as you begin the forward move - he drifts well - and not before. It’s not drop and drive, think of it more like a combination of drop and drive and tall and fall, right now he moves forward really well, just incorporate the drop into glute. Glasnow says he feels like he’s sitting into a chair.
That’s what I would focus on only for now, only make adjustments to one thing at a time. And usually you want to start from the ground up.
Hope this helps.

I’m going to explain this in what I believe to be true force transfer. It’s not pushing off the mound that creates force, it’s the movement down into the ground that stores the energy in your biggest muscle (glute), then when you rotate, that energy transfers up into your thorasic spine, out the arm and into the hand. So you need the size and strength in the glute to store the energy, get into and out of a strong drop, and transfer it, not to produce pushing force.

After that, maybe loosen up the arm swing into deep scap load, looks a bit tense. But that’s for later.
But you are right, at that size, he should be getting a lot more out of that body. But he is 16, and there is a difference between teenage strength and adult strength.

Exactly. The main reason the fastest pitchers have longest strides(eg: Aroldis Chapman), is just because they are overall more explosive and their body can support a huge stride. For 99%+ of pitchers, this is not obtainable.

His back leg is horrible. I had this issue a few months ago. It made it to where it just didn’t look like a pitcher. He should be driving off the rubber.

Also: he pitches 85 in his sophomore year. That is better than 99%+ of people in his age group. Depending on the school, he might be the fastest pitcher on his team with this. A realistic goal for pitching is 5 mph per year. If he follows this trend, he would be pitching 95 in his senior year.