Hi
I hope to be able to post a video here as i ave my videos on ubersense.
My son tends to land open and not stay directional to the plate,amoung a few other things.

I wouldn’t no how to get an ubersense video on here ?[/quote][/GVideo] 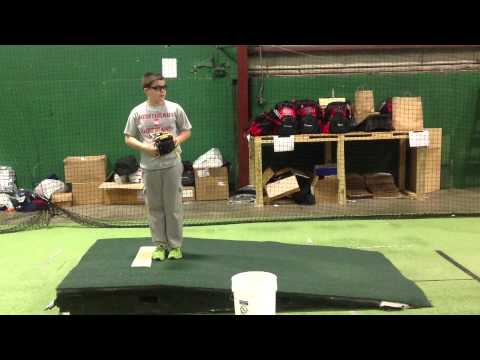 Honestly your sons mechanics look really good especially at 10 y/o! Biggest thing for me is that he should wait on his arm break. He gets to a fully extended position about 3/4 of the way through his stride when he should really only get there once his foot touches down.

Next is he just needs to be more explosive. I am guilty of this too, in that his motion seems just like that - he’s going through the motions. If you watch any hard throwing major league pitcher, you’ll see that they throw with an intent to throw hard- this explosiveness that carries them throug their motion quickly and with a lot of power.

As far as what you said about landing open, you want him to land with his HIPS open. He should try to stay closed as long as possible, but then just before touching down open his hips while keeping his SHOULDERS closed. Then he opens his shoulders up and around comes the arm. So it’s an order, that you want to keep in that order, but it should be done “bang-bang-bang” really quickly one after the other.

The boy looks pretty good. But extension and bringing the leg around can only occur properly proper sequencing earlier in the chain. So you can’t tell him to bring that leg around, you could say step longer or shorter , turn more or turn less, and that will cause the leg to move around. But in your video when u told himto bring his leg around, he simply finished his throw and then brought his leg around.